Purdue - Indiana Recap: Celebrate a Bucket and a Bowl


Ah, that felt good.  On Saturday, Purdue was able to pull away from IU in the fourth quarter for a 56-35 win.  The game was far closer than the final score though and was tied with eleven minutes to play before the Hoosiers fell apart.  And that's what really happened.  Purdue played an OK game, but far from pretty or flawless, and IU made more mistakes and couldn't hang onto the ball in crunch time. 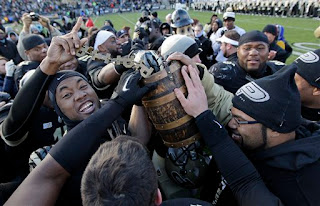 Beating IU always feels good, but it was a little bit sweeter this season since it meant the chance to not only keep the Old Oaken Bucket, but also qualify for a bowl game.  And thankfully, due to the sad state of the conference and Ohio State and Penn State's ineligibility, it means the Boilers won't be stuck playing in Detroit for some free $5 pizza.

There was another reason it felt good.  No, not because Danny Hope was able to end his tenure with a win, or because he was (rightfully in my mind) relieved of his post today (check out Erik's post).  It felt good because I watched it all happen from enemy territory, the heart of Bloomington.  No, I didn't get confused and think the game was at Indiana or drive the wrong way on I-65.  Hanging out with good friends sometimes means you have to put campus loyalty aside, and I thank the entire Purdue football team for allowing me to walk through IU's campus on Saturday evening with my head held high, pumping many a "Boiler Up" into the air.

What Went Well
I felt like Saturday was a celebration of the senior class, as Senior Day should be.

Robert Marve: An efficient 20 for 29 for 348 yards and four touchdowns.  Yes, there was an interception, but since that ricocheted off of at least three different players, it's hard to get too upset about it (although it was a big momentum killer).  There were a couple near-miss interceptions, too, but Marve played smart and it's been so clear that his leadership and passion on and off the field brings out the best in the Boiler offense.  Even when his pass was intercepted, he ran half the length of the field to track down the culprit and lay a great tackle on him.  Quite a nice run for a guy without an ACL.  It's going to be a pleasure watching Marve in the bowl game, and it's just a shame we didn't get to see as much of him leading the Boilers as I'd have liked.

Akeem Shavers: 27 carries for 126 yards resulting in one touchdown and two catches for 99 yards for two touchdowns,  Talk about a fantastic freaking day! 225 of all purpose yards - the man simply would not be stopped.  Rumbling through tacklers, making Hoosiers miss and look silly, and stiff arming with a vengeance, it was nice for Shavers to have a career day in his last meaningful collegiate game.  He had another 70-yard touchdown run as well, but it was called back for holding.  We knew the way to beat IU was with the run game, but hit two critical monster receptions were icing on the cake.

Kurt Freytag: Who?  I don't think the fullback has warranted a mention on our site until this weekend, since he was a non-entity all season, but then he rattles off a 16-yard run and two catches for 31 yards.  Another career day for a Boilermaker.

Antavian Edison: Edison and the receiving corps were plagued by drops in the second quarter, and he was fairly quiet in the second half while they guys mentioned above did most of the work, but he had five catches for 50 yards, including a touchdown in the first quarter.

Crosby Wright: The big guy needs to watch his holding penalties, since one negated a 70-yard touchdown run, but he had three catches in the second half for 81 yards that were huge on some of Purdue's scoring drives.

Max Charlot: Another senior we've never mentioned.  The safety came up with a great interception that basically iced the game for the Boilers. 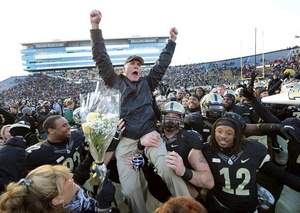 What Still Concerns Me
It's hard to really be too concerned with what's next this season.  It's nice to win a bowl game and end the season with a winning record, but it really doesn't matter in the grand scheme of things.  It definitely won't matter for recruiting since receivers coach Patrick Higgins will serve at interim head coach for the bowl game, and it's anyone's guess if Burke will announce a hire before that time.  The Boilers will likely be over-matched in their bowl game against a Big 12 opponent, but the game should still be exciting, and it will be nice to see the seniors play one more time.

Likewise, I can't be too concerned with next season until we know more.  The defense gave up far too many rushing yards to Stephen Houston and the Indiana backs and didn't get to Coffman as frequently as I'd like, but that doesn't mean next year's team will have the same issues.  Firing Hope was the right thing to do, even though I think he's a fantastic guy.  Purdue's already lost a few recruits who had verbally committed, but with the right coaching choice, they'll pick up some new ones as well.  I'm happy I'll never have to think about Nord again, and a new offense could inject some much needed life into the fanbase.

Plays of the Game
There were a lot of big plays, and I can't just pick one.  First, there was this great string in the third quarter:


Continuing the trend of quick momentum shifts, after IU tied the game at 35 in the fourth quarter, another trio of big plays sealed the deal for Purdue.

What About the Real IU Football Team?
Most IU students and fans couldn't tell you the name of the Hoosiers' starting quarterback (that isn't an exaggeration, I checked) because they'd rather ignore their athletic program's weaknesses and focus on the strong reemergence of the basketball program.  The football team they really support, Notre Dame, is going to play for the national title, so even though they lost the Bucket, many don't care. I've shared my feelings about the Irish earlier this season, and it's incredibly painful to know that they only have a place at the table because Purdue let a game slip through their fingers. I'll be rooting hard for the SEC champion to win the national title, merely as the lesser of two evils.  I sure hope it's Georgia, so that I don't have to cheer for Nick Saban.

Picks of the Week Update
Erik was spot on that the Boilers would win by a large margin, and since he went "all in" with his $220 ticket to watch the Cavs lose a heartbreaker to the Spurs in 2007 NBA Finals, he's safely in the lead with $172 to my $119.50.  I maintained my commitment to bet against Purdue with the spread, but will I break away from that for the bowl game now that Hope is gone?  I can't let Erik see all my cards, but turns out what I do doesn't matter one iota mathematically.  For the bowl game, we each have to bet double our previous bet, so I'm in for $200 and Erik's in for $440.  Therefore, it really comes down to only two possible scenarios:


No pressure, Erik!  I'm already formulating my plan to pick Purdue to win by 999 points.