After dropping the first game of the season to Bucknell, the Boilers made easy work of a very poor Hofstra squad yesterday.  Honestly, I think we learned more about the team in the Montevallo exhibition game, because Hofstra simply couldn't compete (which we should have known when they lost by 29 points to Monmouth in their opener). 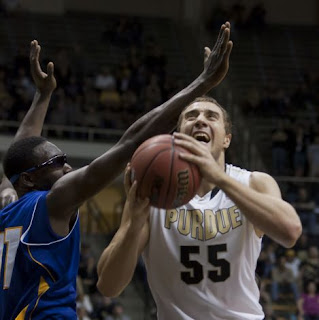 Who's happy that we can actually watch the next few games on television!  I hope the Big Ten Digital Network is put to pasture by next season, but I'm guessing we'll see even more games broadcast on that revenue stream in the future.  Also, don't get too comfortable with your TV, as the Boilers will be featured on  "ESPN 3" (i.e. your laptop) later in December.


Our Picks Update
I am officially 0 for 4 this season, and I've bet my maximum four times.  If this lasts for six more weeks it will be impossible for me to net a positive result on the season, and I think Erik already has the victory secured.  So instead, it is now my goal to get the largest negative score possible.  Yes, my bets will be the opposite of a winning bet, but watch, I'll probably do better betting the opposite of what I think will happen.


Standings through three games
Erik +84
Kirk -122
That's a 206 point lead Erik, enjoy it and bar me from ever going to Vegas again.