For half a game last night, Purdue looked like the team we've watched all season: too many turnovers, missed free throws, inconsistent offense, trouble holding a lead.  And for the other half of the game, thankfully, DJ Byrd decided to channel JJ Redick. 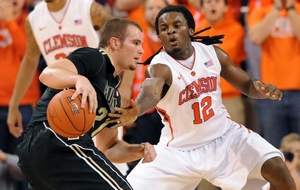 In the first half, the Boilers played like a team on a mission.  I suppose having a week off to prepare can do that for you, and even though Clemson was missing it's best player, you can't blame Purdue for taking advantage.  Byrd lit up the Tigers for 20 points in the first half.  This was some amazing production from a player I was getting pretty frustrated with so far this season.  As the senior leader of the team, Byrd hadn't been able to find his shot yet this season prior to this game, shooting only 34% overall thanks to a paltry 28% from long range.  This is especially crucial since one thing the Boilers lack without Byrd is a three-point threat (although Terone's been shooting them well this season, just not that frequently).

DJ made his first five attempts, including four threes in the first six minutes of the game.  At that point he was on pace for 75 points on 25 threes.  Obviously he cooled down a bit as the Tiger defense had to focus on guarding him much more closely, and this created opportunities for the rest of the Boilers.  In the first half Purdue shot 57% to Clemson's 43%, which allowed them to build a 20-point lead by halftime.

The unsung hero of the Purdue first half was the team's rebounding, pulling down 22 boards to Clemson's 6. Yes, you read that correctly.  Clemson went over 12 minutes in the first half without a rebound.  If I were a Tiger fan, I think I would have lost my voice screaming at the television.  Purdue definitely had a height advantage, but they were also playing aggressively and with the passion I was hoping to see earlier this year. Part of the rebounding margin was due to Clemson missing more shots, but credit Purdue for not giving up an offensive rebound.  The other less positive reason was Purdue turned the ball over too much.  It's one thing we're simply going to continue to see from this young team, but as we saw last night, good shooting and rebounding can more than makeup for that.

The second half was not as pretty, and for some reason, even with the Boilers leading by double digits almost the entire time, I felt like they were losing.  I guess that was because the Clemson fans were getting into it (after sitting on their hands for their ugly first half) and Purdue went back to playing sloppy basketball, missing free throws down the stretch and getting out-rebounded.  It wasn't horrible, but it wasn't pretty, and if not for the awesome first half, Purdue could have easily lost by double digits.

But they didn't.  This win will be critical for the Boilers' postseason hopes in March, since the committee likely won't remember that Clemson was missing it's top scorer (just like Purdue won't get any grace for not having Terone in the Bucknell loss), and a double-digit road win against a quality opponent carries a lot of weight. 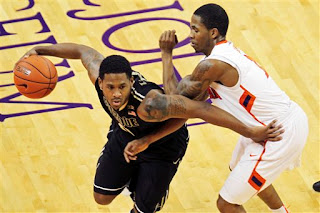 Other things that were positive from the game included the tightened rotation and the play of AJ Hammons and Terone.  Painter didn't employ his 11-man rotation like in previous games, giving the bulk of the minutes to seven guys.  Ronnie seems to fit into the sixth man role well, giving the team more consistency from the onset with Anthony Johnson at the point.  Ronnie had ten points with seven rebounds and three assists.  The bench player being used most heavily next was a surprise for me.  Travis Carroll played fourteen minutes and tallied four points, four fouls, and only one rebound.  I'm not sure exactly why Sandi didn't play at all, and I wouldn't expect that to continue, but I'm still not sure what Carroll adds other than a bit of experience.  It'll be interesting if this trend continues against Xavier.  Other than that, Simpson and Davis barely played, and Hale logged an ineffective nine minutes.

But back to the starters, I thought Hammons and Terone had nice games.  Big AJ can do a lot of good things down low, and I think he's only scratched the surface.  He had ten points on efficient shooting, made his free throws, had two blocks and six rebounds, and was a good defensive presence.  He'll still need to watch his foul trouble, especially against more physical teams, but I'm really excited for his future at Purdue.  Terone tallied thirteen points, six rebounds, and an impressive six assists.  The Boilers will need Terone to but up good offensive numbers every night if they hope to survive in Big Ten play, so it's nice to see him produce.  DJ won't rack up 22 points most nights.


Our Picks Update
I'm sad to report that my streak is over.  I picked correctly that the Boilers would cover against the 5.5 point spread.  I know I let you all down by not choosing incorrectly, since you've been basing your real bets off doing the opposite thing I do this entire season.  Sorry about that.  I'll try to do better, I mean worse, next time.