Doing these power rankings sure gets old when:
a) Purdue sucks
b) the conference only has one overwhelmingly good team
c) the creamy nougat middle of the chocolate bar (I'm on Halloween candy-eating overdrive) keeps beating each other up 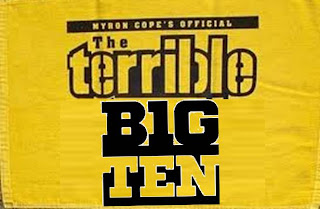 On to the rankings, where I just hope Purdue can win the Bucket game this season:

Still undefeated.  Still can't play after Thanksgiving weekend.  The Buckeyes took down Penn State at home, but they still have to play at Wisconsin and against Michigan.  Both are games they should win.

Nebraska beat Michigan by 14 points, holding them to three measly field goals.  Yes, that's partly due to Denard Robinson getting hurt and not playing in the second half, and his backup threw three interceptions.  But guess who's in first place in the Legends division now?

Penn State lost Ohio State, but so has everybody else.  Their defense did a great job stopping Braxton Miller in the first half (especially through the air), but he was still able to torch them on the ground. They almost equaled the Buckeyes in total yardage, but Penn State failed to get the running game going or convert some critical third downs.  Don't think this is a big setback.  The Nittany Lions are still much better than anticipated, and unless they overlook the game, should easily beat Purdue this weekend.

Losing to Nebraska really hurts Michigan's chances of making it to Indianapolis, but losing Denard Robinson hurts more.  He's expected to play, but without him, Michigan would be much lower in these power rankings and no threat to win their division.

The Wildcats returned to winning form with a victory over the Hawkeyes in Evanston, leading 28-3 at one point in the second half before letting Iowa sneak closer.  Colter and Mark are a beast on the ground and have the week off to rest.

Michigan State went to Wisconsin and won in overtime, after having to come from behind in regulation with less than two minutes to go.  Chalk this one up to the defense continuing to play well and Wisconsin blowing it.  In their five conference games, the victors have been decided by 13 total points, with two of those games going to overtime.  So when you play Michigan State, expect a very close game.  Should be a fun one as they host Nebraska this weekend on ABC.

Oh what could have been if Purdue didn't suck this year.  The Badgers blew it at home against Michigan State and make the Leaders division look even more pitiful as a 4-4 conference record may be enough to play in Indianapolis.  Ridiculous.  Wisconsin only has Indiana, Ohio State, and Penn State left on the schedule, and it wouldn't surprise me if they only beat IU in that stretch.

Good for you, you crushed a hapless Purdue team.  Minnesota doesn't move up much in the rankings though, because they still haven't beaten anyone good.  Their freshman quarterback looked great, but we'll see how he does against real opponents, and he'll see one this weekend when Michigan comes to town.  Robinson is expected to play, but if he isn't 100% maybe the Gophers can steal a win.

Iowa lost to Northwestern this last weekend, making it two poor showings in a row.  They may be in for a battle this weekend at Indiana.

All you get for beating Illinois, since all the cool kids are doing it these days, is to move above the pathetic Boilermakers.  I laugh hysterically every time I read a local Indianapolis story about how Indiana still has a shot to win out and make the conference title game.  I think the Hoosiers should just focus on winning another game, since I doubt they can win more than one the rest of the season, playing Iowa, Wisconsin, Penn State, and Purdue (in West Lafayette).

You've already read about how horribly Purdue played against Minnesota.  Let's just leave it at that.  Pitiful.

You lost to IU at home.  You are worthless.  Good luck with Ohio State this weekend.