Another exhibition game, and another evening of sitting by the radio (or laptop) or watching online on the Big Ten Digital Network.  What, you haven't purchased the monthly plan yet?  Me neither.  Like the previous exhibition game against Montevallo, I was stuck listening to portions of the game, so most of our insightful analysis will be based on the box score.  Unfortunately I didn't find a replay of the game this week on BTN, but it looks like this game didn't feature quite as challenging of an opponent as Montevallo. 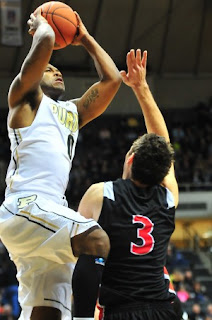 While the Boilers gave up a few more points in this one, clearly the shorter Wolves couldn't stop the Purdue offensive explosion.  Erik predicted in our game preview that there may be some turnover issues on both sides of the ball, and he was right.  Newberry had 22 turnovers but also forced 19 from the Boilers (10 from the freshmen, as Erik also foresaw in his crystal basketball).  Ronnie Johnson had five, and that's something that could be a real killer this season as the freshman and his fellow newcomers get adjusted to playing with each other and the speed of the college game.

The good news, despite the turnovers, was that Purdue had 16 more second-chance points, and part of that was due to their terrific shooting.  Purdue shot 55% from the field and 46% from three point range.  That's something I really hope can be a trend, although I'm not expecting it when the defense is taller and more skilled.

It was nice to see DJ Byrd get his offensive game on track, as he scored 11 points, but the other guards really made some noise.  Terone Johnson scored 18 points on 80% shooting, Ronnie racked up 16 points on 6-9 shooting, and Rapheal Davis tallied 16 points as well.  And while Anthony Johnson didn't score as much, he dished out eight assists, which is pretty amazing for a guy who isn't a true point guard.  But wait, that's not all!  Little AJ also led the team in rebounding with seven boards, and when a guy who has "little" in his nickname can do that, it means he's playing some great basketball.

How did the bigs do?  The minutes were split almost perfectly evenly between the six Boilers, and all were able to score and pull down about five or six rebounds, including at least two offensive boards per player.  The team had eight blocks, which should be expected against a team with less size, but did anyone expect four to come from Travis Carroll?  Maybe the competition between these titans will bring out the best in each.

Since we set a completely made-up point spread of 25 for these two exhibition games, Erik wisely chose middle values to bet, and got both games correct.  I, on the other hand, am starting the season in a deep, deep hole.  I'm so deep I think I see China.

The real season begins on Friday night against Bucknell in what could be a very challenging game, so get ready, and check back here soon for our game preview with all the important things you need to watch for.