I'm not one to normally toot my own horn (Kirk may disagree with this statement), but boy have you guys been treated to some amazing predictions by yours truly.  In fact, I'd argue if that you remove all of Kirk's predictions from the last several weeks, this blog might be known as the most accurate prognosticating blog in all of college sports!  Not only have I picked all 4 basketball games correctly against the spread, but I also totally called the screenshot of the week... 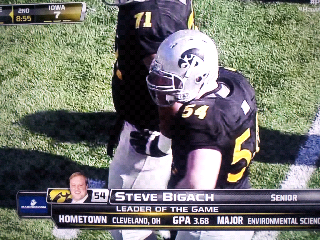 Thing I learned from BTN: Nothing.  Now, I don't normally learn much from BTN, but did anyone actually stay home and watch the game live?  It was 70 degrees outside (plus nobody wanted to sit through 3 1/2 hours of another potential blowout), so I, along with Boiler Nation, watched the game on DVR.  And boy was it glorious!  No horrible announcing.  No watching highlights of a no-hitter that BTN was lucky enough to televise every single commercial break.  No J Leman. And a Purdue win. What a great Saturday!

Announcer complaint:  Since I didn't really hear much of the announcing for the game, I'm going to pick apart the BTDN announcers who were particularly bad.  Let's point out the more obvious:

1) Reading the 4-minute pregame discussion as if it was the first time they'd ever seen it;
2) A horrendous lead in to the "sideline reporter", who in turn treated her segment as if it was her first time in front of the camera (I believe at one point she mentioned Purdue has a "chance" at winning when up 30 with 5 minutes to go);
3) Every single shot was a "great" shot, regardless of if it was an air ball or not;
4) They said things like "I've got Johnson's on my brain!".

Comment of the Week - Wife Edition:  "Maybe he should have been the kicker all along!"
Tweet
Posted by Erik at 10:49 PM

Email ThisBlogThis!Share to TwitterShare to FacebookShare to Pinterest
Labels: Broadcast Recap, Iowa, Screenshot of the Week