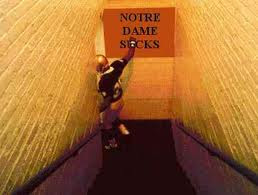 Boy do I hate Notre Dame.  I hate their sense of entitlement.  I hate their "if you're Catholic/Irish you have to root for us" arrogance.  I hate their belief that football is as important as their faith.  I love Jesus, but I hate "Touchdown Jesus." I hate that all their home games air on NBC, with announcers that are incredibly biased because they know who pays them.  Now that I think about it, I hate NBC.  I hate that I visited campus once and actually had a good time (the things one does for a U2 concert). I hate the BCS system that perpetuates giving them special treatment and undeserved opportunities.  I hate that every coaching change, since Bob Davie, is treated like a savior arriving to campus.  Who can forget George O'Leary? I hate fair-weather fans in my state, and across the nation, that couldn't name five players on the team but sport the school's apparel every fall weekend.  I hate the attention their quarterbacks receive, even though one hasn't succeeded in the NFL for almost 30 years.

I also hate that I throw around the word "hate" a little too loosely, but I really don't like that school.

Now that I got that off my chest, let's talk about the actual game this weekend.

A lot has been written about the decision to start Caleb TerBush after his suspension.  I tend to agree with J at Boiled Sports.  I expect all Boilermakers to rally behind the team, and I'm putting my trust in the coaches that know a heck of a lot more than me.  If you read my recap of the Eastern Kentucky game, you know I thought Marve deserved the start, but I want the best chance to beat Notre Dame.  I know that's what Danny Hope wants, too.  The coach has a lot riding on this decision, so I don't think he's made it lightly or without some specific game plan in mind.

Why Purdue wins
Purdue proved last week that they can dominate an inferior opponent, could run the ball well, and put up nice passing numbers with a "backup" quarterback.  It's going to take some sharp quarterback play to take advantage of the Notre Dame secondary, but the real key for the Boilers will be their ability to stop the Irish with their veteran defense.  Against Eastern Kentucky, the defense was incredibly solid, only giving up one big drive and hunkering down after repeated turnovers.  While I don't fear this Notre Dame team as much as other teams in the last decade (and think their ranking is too high for all the "hate" reasons mentioned above), it will take some excellent play on both ends and the ability to win the turnover battle to come away victorious.  I also think the coaching staff has a few tricks up their sleeve, since the offense was pretty conservative last week.  There's also the hangover factor after ND returned from Ireland this week, and maybe Purdue can start fast and catch them sleeping (like Notre Dame did to the Boilers last season). And maybe Navy is just really that bad and worse than an FCS school.

Why Notre Dame wins
Lucky charms, of course. Notre Dame is the big favorite after mauling Navy last weekend in Ireland, and they have some potent weapons.  They spread the ball around to a lot of skilled receivers, and they almost had two 100-yard rushers last game.  Purdue didn't do a very good job stopping the Irish offense last year either.  On defense, ND boasts a stout line that could cause a lot or problems for whichever quarterback Purdue decides to put under center.  There's going to be a lot of pressure and may not be much time for the passing game to get into rhythm or for receivers to get open down the field. Also, Purdue has only won once in South Bend since 1974, so that sucks.

Player we're most concerned about since their stock photo may break our TV
I didn't find a particularly goofy head shot, but I did find some guys that were trying way too hard to look intimidating on picture day. (They also both happened to have ridiculous names)

Check out Carlo Calabrese and Prince Shembo (pictured to the right)

1. They have a dude named Chris Badger.  I'm sure you're thinking, "How did he not go to Wisconsin?"  Better question, coming out of Provo, Utah, how much does it piss BYU off that he's at Notre Dame?

2. They also have a Chris Brown.  I already like him, because he looks hilarious and hopefully doesn't beat women.

3. Best* name on the team: Starting center Braxton Cave. (*by "best" I mean most Notre Dame-douchiest)

Picks of the week
The spread obviously favors Notre Dame at home (-14.5). This week, Erik and I will be betting the value of the shoes we are currently wearing as I write this post.

Kirk's Bet
Right now it's not just football season, it's also US Open season.  For those that couldn't tell from our other posts, we're big tennis fans, and after attending the Open last week in NYC, I can't get enough.  So I'm proudly wearing my blue Adidas Rod Lavers.  They were a huge bargain on sale for $30 when I bought them about 7 years ago, but they have some wear on the white edging, so they'd probably only fetch like $10 right now (although they must be a collectors item since they don't make them in this color/style anymore).

I think Purdue is going to make this a closer game than many think, but in the end, the leprechauns win at home. Notre Dame 24 - Purdue 17

Erik's Bet
Erik doesn't get to be so casual at work, so he's sporting some black Dunham dress shoes that he purchased for $89 about 6 years ago.  He wears them nearly every day because he's too lazy to buy new shoes, so they're in pretty bad shape.  He's offering them up for $6.

Erik is just as pessimistic, as it's hard to pick Purdue as the outright winner, even though we're rooting hard for it.  He's also got the Boilers covering the spread, but based on our overly cautious picks last week, don't expect us to be that close on the point margin.  Here's hoping Purdue proves us horribly wrong again. Notre Dame 31 - Purdue 20

2. Remember this?  Let's see it happen again on Saturday!