Boiler Up!  The five-game losing streak is over, and it ends at a location where the Boilers hadn't won in the previous 25 years.  It wasn't even remotely pretty, but Purdue leaves Iowa City a 27-24 victor.  I'm going to break away from our football recap protocol (which Erik has a habit of doing with hilarious/depressing results), since this game had simply far too many storylines to fit our format. 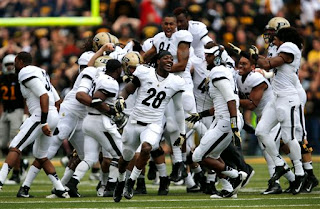 The ACL Redeem Team
There's a lot of good to discuss from this game, and I'm very pleased to start with the ACL victims who turned up big at Iowa.  Marve went 25 for 33 for 266 yards and two touchdowns, including a huge run and sharp pass that set up the game winner.  Honestly, he looked very agile for having non-functioning ligaments, and he made lots of smart plays.  Bolden became Purdue's first 100-yard rusher this season with 102 yards on only 14 carries.  It's nice to see both players doing good things on the field in their short remaining time in gold and black.

First Half Dominance
Despite two first-half fumbles (more on those later), the Boilers played incredibly well on both sides of the ball.  Check out the first half statistical comparison:

The Defense Returns
During the five-game losing streak the defense looked horrible.  The schedule was front-loaded, but when Purdue couldn't stop a poor Minnesota team, everything seemed to be going wrong.  On Saturday, the defense did a fantastic job stopping a bad team, and hopefully they got a confidence boost.  Taking out the turnovers, they only gave up ten points and held Iowa to 74 yards rushing and 190 passing. The defensive line was able to pressure Vandenberg (three sacks), and the Hawkeyes were only able to convert four of sixteen third-down attempts.

The Slop
I'd love to continue heaping praise on Purdue, but this game was sloppy in so many ways, and some of the same problems that have plagued the team all season haven't disappeared.  First, Purdue had ten penalties for 100 yards.  There were definitely some officiating issues, but that's a ridiculous penalty impact and shows the discipline level of this team.  Then there were the turnovers.

There's not way I thought Purdue would win a game at Iowa losing the turnover battle by three.  The three fumbles (Bolden, Hunt, and Marve on a bobbled snap) were all costly in their own way.  One fumble took Purdue out of a scoring opportunity, and the other two resulted in 14 easy points for the Hawkeyes.  I'm glad Marve didn't throw a pick, but Purdue has to hang on to the ball better if they want to make a bowl game.

Runners in Beast Mode
There was some horrible tackling by Iowa, but I was very impressed with how hard the Boiler receivers and rushers did after contact.  Bolden's huge 56-yard run is a great example, and Akeem Shavers kept on motoring after getting hit, especially in the first half.  I'm still trying to find a stat on the receivers' yards after catch, but they fought hard and picked up critical yards to keep drives going.  This wasn't something I considered a strength for Purdue (especially since so many short and screen passes resulted in no additional yards in previous games), so it's nice to see some added passion and intensity from the team.

Lock Up the Zebras
There was some horrible officiating in this game, including a drive-killing phantom holding call, a horrible missed call on a play that nearly got Frankie Williams killed fielding a punt, a bad personal foul call claiming Josh Johnson hit a receiver high (he didn't even come close) that kept Iowa's last drive alive, a ticky-tack clipping call (I sure think the Iowa player fell on his own, although I think there was a second clipping call later in the game that might have been legit), and a strange call that nullified a fourth quarter first down catch by OJ Ross (the broadcast had no video to show Ross stepping out of bounds, so I'm skeptical).

Iowa Out-Purdued Purdue
Down the stretch I didn't have much faith that Purdue wouldn't blow the game.  But Iowa stalled on their potential game-winning drive, going for it on fourth down and failing, and with just 21 seconds left on the clock, Robert Marve had time for two plays before Griggs' field goal.  A 17-yard run by Marve and a 20-yard bullet to Antavian Edison, and that was all it took.

I say that Iowa Out-Purdued the Boilers because they gave their fandom life with their comeback attempt, but then shot themselves in the foot.  The stalled 4th quarter drive failed more because of repeated dropped passes than the Purdue defense.  Hawkeye coach chose to go for it on fourth down instead of kicking a moderately-long field goal into the win, and that proved to be the wrong decision.  Purdue fans are used to the wrong coaching decision.  Also, all the Iowa defense had to do was stop Purdue twice, but they couldn't stop a quarterback with one ACL scrambling, and the left Edison wide open in the middle of the field.  It felt like I was watching Purdue in the black jerseys at the end of the game, but thankfully Iowa now gets to feel our pain.

Griggs' First Game Winner
Freshman Paul Griggs hadn't been doing so well recently.  Against Ohio State he missed two field goals and an extra point, and then he was benched against Minnesota.  Sam McCartney took his spot kicking four extra points (no field goal attempts) against the Gophers, and nailed short field goal against Penn State while Griggs was called upon to use his stronger leg but missed a 45-yard attempt.  With the game on the line this weekend, despite not playing at all, Griggs was called upon to come in cold and attempt a career-best 46-yard field goal.  He crushed an awkward-looking line drive through the uprights and hopefully regained some confidence in his leg.

Trouble on Special Teams Again
Griggs' game winning kick was fantastic, but it wouldn't be a Purdue football game without some aspect of the kicking game going wrong.  Sam McCartney botched a 20-yard attempt at the end of the first half.  Yes, it was from the hash mark at a tight angle, but that's no excuse.  Obviously that proved costly in such a close game, but McCartney did at least redeem himself a little by making a 36-yarder.

Two Bad Teams Enter, One HAS to Win
There's no debate that the Iowa and Purdue football programs are both in really sorry shape.  We all know how horrible Purdue has looked (except when playing undefeated teams), and Iowa, despite entering the game with one more win on the season, is a ship sinking fast.  Sure, the Hawkeyes beat Michigan State in double overtime, and handled Minnesota (which we saw the Boilers fail miserably at), but it's been pretty ugly for a team that should have been much better.  Sounds like Iowa is a lot like Purdue, except with a much longer-tenured coach with loads of past success.  But we'll get to the coaches in a second.  Let's not take this win for more than what is is - Purdue beat an equally bad team and is still very far from being a "good" football team or having a "successful" season.

Hope Saves His Job (for at least one more week)
It was rumored that if Purdue lost, Hope would be immediately fired.  Although that thankfully didn't happen (thankful Purdue won, not that Hope still has a job), I expect the same ultimatum to be in place next week at Illinois and assuming a win, against Indiana.  It still makes you ponder though: if Hope wins out, does he get fired immediately?  I don't think Burke can wait to see the result of a meaningless bowl game, so it's my opinion that Hope is a dead man walking.  There's been lots of talk about Northern Illinois coach Dave Doeren (interesting side note, Northern's only loss of the season was by one point to Iowa in week one), and if Burke is already headed down that road, nothing Hope does will change it.  You could hear the huge relief in Hope's voice when he was interviewed on the field right after the game, but I almost thought he'd start crying.

Nord-less Offense is an Improvement
Gary Nord missed the game with a back injury.  We hope he gets better soon and that the damage isn't serious, but I never want to see him on a football field again.  With receivers coach Patrick Higgins calling the shots, Purdue's offense played its best game in a long time (other than the fumbles, which had nothing to do with the play calling).  Fans had been begging Nord to better utilize our talent in the running game and to open the play book to passes beyond 10 yards, but Nord knew better than us peons.  Against Iowa, Purdue threw 35 times with 8.0 yards per completion and ran 44 times, averaging 4.8 yards per attempt.  That's production and balance.  Every Boiler wide receiver and tight end had a reception of at least ten yards, and nine different players caught a pass.  Give Higgins the job full-time for these last two games, please!

Can Either Team Make a Bowl Game?
Since Purdue was victorious, both teams are now in a similar position: win your last two games and make a bowl game.  Purdue gets to play Illinois and Indiana, two of the worst teams in the conference, while Iowa must face Michigan and Nebraska, who are the only two teams in contention for the Legends division title.  Ha, good luck Iowa!  At most seven Big Ten teams will be bowl-eligible (and potentially as few as five), so making a bowl could mean a big time game (and a big time opponent) even if it's mostly undeserved.  Also, since Wisconsin destroyed Indiana (insert a Nelson Muntz "Ha Ha" here), Purdue is definitely out of contention to represent the Leaders division in Indianapolis, but if you read this blog regularly, you already knew that.

Picks of the Week Update
We both incorrectly picked an Iowa victory (can you blame us?), but Erik wisely thought Purdue would keep it close, so he's the big winner this week, moving up $27 while I lose $6.  Thank goodness I'm a cheapskate when buying used golf clubs, or else I'd be hurting even more. On the season, Erik's at +$51 while I'm at +19.50.  With two games left, huge bragging rights are on the line (especially since I've almost made it mathematically impossible to beat Erik this basketball season, but that's a future post).
Tweet
Posted by Kirk at 11:49 PM