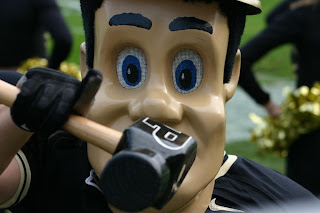 With only two games left, the rankings are getting a little easier, but there's still the chance for upheaval at the top.  I told you there'd be two great games featuring sequential teams in the rankings, and they certainly didn't disappoint.  #2 played #3 with a close result in a hard-fought game, and the game featuring #4 vs. #5 went to overtime.  Of course I'm in a much cheerier mood this week thanks to Purdue's victory on the road in Iowa coupled with Indiana's crushing defeat to Wisconsin at home.


On to the rankings, where Saturday sports no longer suck:

The Buckeyes had a bye week, but obviously remain undefeated and the top team in the conference.  Odds of that changing in the next two weeks? Higher than you may think.  OSU still has to face Wisconsin on the road and Michigan at home.  If they lose both and Michigan wins out, it could shake things up.  Thanks to convincing wins over Nebraska and Penn State, that leapfrog won't happen.

Last week I wrote about how Nebraska just keeps winning games after coming from behind.  Taylor Martinez is the king of the fourth quarter.  The Huskers beat Penn State thanks to 26 second-half points.  The division title is theirs to lose with easily winnable games against Minnesota and Iowa left on the schedule.  I think a Nebraska/Wisconsin title game will be a fun one to watch, but I doubt the Cornholes will have to come from behind in that one..

Michigan also had to come from behind to force overtime where they topped Northwestern.  I don't think they'll catch Nebraska, especially without Denard Robinson.

Penn State had the lead but froze up against Nebraska.  While I was watching this game, I thought the negated Penn State touchdown was a fumble when I watched in real time.  After watching the replay, I wasn't so sure, and because of that, I felt the call on the field should stand.  But even though the Lions got hosed, they still crapped the bed the rest of the game as McGloin made a stupid mistake to get flagged for a safety (no doubt about that being the correct call) and they couldn't stop Nebraska on defense.  There is absolutely no conspiracy, there was just a very questionable call, and the fact that Penn State fans are acting like the world is out to get them is ridiculous and shows their priorities are still a bit unbalanced.

Even with their huge win against Indiana (564 rushing yards!) I still have trouble ranking Wisconsin this high since they haven't beaten anyone good.  The Badgers real test will be against Penn State and Ohio State in their final two games.  They can prove me wrong by winning one of them, but we may see a 4-4 conference team in the title game and headed to a marquis bowl game with a 7-6 overall record.

The Wildcats lost a heartbreaker to Michigan in overtime, but it just fit their theme for the season: beat the bad teams, but lose narrowly to the good ones.  They've lost to Michigan in OT, Nebraska by one point, and Penn State by eleven points.  Even with their pretty record, this season is a case of what could have been.  Fortunately they'll still get one more win against Illinois, but their game next week at Michigan State is how a toss-up.

Sparty had their bye week and need to beat Northwestern or Minnesota to get bowl eligible.  They're currently in last place in the Legends division, which no one predicted prior to the season.  What a disappointment.

Minnesota did their Big Ten duty and beat the horrible Illini, and in the process became bowl eligible.  This is a big deal since the Gophers finish against Nebraska and Michigan State, both games they will probably lose.

Eureka!  With winnable games against Illinois and Indiana, there's still hope for a bowl game.  Of course, the Boilers could very easily lose both those games, but here's hoping Hope goes out on a high note. 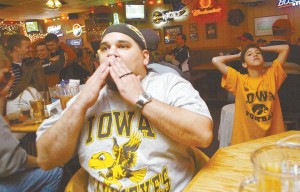 It feels good to laugh at IU football again, and to laugh at all the annoying people in Indianapolis that thought the conference title game would feature the Hoosiers.  They were exposed horribly as Wisconsin racked up 564 yards rushing.  The badgers only had to throw the ball seven times, a tactic the Boilers should note.  Can't wait for the Bucket game, and hopefully IU will be even more abused by Penn State in the meantime.

The Hawkeyes out-Purdued the Boilers and now must beat Michigan and Nebraska to get bowl-eligible.  That's not happening.