For 59 minutes and 13 seconds, this game was a blast.  Sure, we wasted a ton of opportunities and should have already been celebrating a double-digit win, but a solid Purdue defense just needed to stop a backup quarterback with no timeouts and 47 seconds left.

25% of the stadium had left after Landon Feichter's interception with under 3 minutes to go.  This was Ohio State - their fans had given up at home against Purdue!  Watching the offensive huddle after the interception, several players weren't paying attention and instead were turned to the Purdue crowd and band trying to pump up the faithful who made the trip.  Sure enough, the focus was gone and a false start pretty much was the beginning of the end.

The worst part about OSU tying the game?  Watching the Purdue band, who had already filed down to the field in preparation for what was about to be an awesome post-game show, climb back up to their seats.  Indeed, the band members weren't the only ones heading back to their seats...nearly our entire section (first ten rows near the overtime goal line) filed back into the section.  We remarked that it was lucky they hadn't left the building.  Their response?  "Oh, we did - but there were so many people who wanted back in that they couldn't stop us all."

The game was dominated by missed opportunities...some you could tell by watching on tv.  Some, you couldn't.  We break down ALL the missed opportunities that pretty much could have sealed the game, and perhaps you may be a bit surprised at how close the overtime really was (check out #13!)....

The fifth missed extra point of the year finally came back to haunt Purdue.  An eight point lead would have been nine.  Ohio State scores a touchdown late.  Purdue ends up with an easy 2-point road victory.  Unlike some of these other missed opportunities, this one didn't change the flow of the game at all.  In fact, I can't think of one play that would have changed if this extra point goes in.

Those of you who read the blog religiously may have seen my comment after Kirk's game preview.  I'll take a few liberties, but it basically said we can win this game if we score quickly and then take a two score lead off a turnover.  Frankie Williams had a WIDE OPEN pick six midway through the first quarter which would have given Purdue a 13-0 lead (I mean 12-0...we'll take nothing for granted here).  Instead, it was dropped, and my dream of becoming Miss Cleo would have to wait another day.

The 6th possession of the game started less than 6 minutes into the game.  At that point, Purdue looked in control, yet the game was barely underway!  With a 13-7 lead late in the first quarter, the Boilers started an amazing drive from their own 9-yard line.  The 19-play drive included a fake punt (setup brilliantly by the prior two punts) and only had two clock stoppages: the end of the first quarter and a pass interference call on Ohio State.  The play-calling was balanced and outstanding in the drive that lasted 10:32 (!) until we got inside the 10-yard line.  Inexplicably, a drive that featured Ralph Bolden, Rob Henry, and Caleb Terbush ended with two consecutive runs to Antavian Edison (his first two rushes of the game!), followed by a 3rd-down interception in the end zone.  I'm not sure if anyone else was infuriated by the two runs to Edison, but prior to the third down, I mentioned that an interception was likely...the play-calling set TerBush up to force his throw and the interception was inevitable.  Even three points there would have given Purdue a huge two score advantage.

Missed Opportunity #4: The Blocked Field Goal (set up by a horrible play-call)

Everyone knows Purdue's kicking game leaves a lot to be desired.  Even Ohio State fans were begging Purdue to kick the ball.  So when the Boilers ran/dove the ball into the center of the field at the 17-yardline on 3rd and 9, Purdue fans had to feel something bad was about to happen.  This team should NEVER set up a play that results in putting a foot on the ball.  Sure enough, Paul Griggs had his kick blocked by the elbow of a stationary lineman that was still on the line of scrimmage.

Let's think about that for a second.  The holder lines up 7-yards behind the line of scrimmage.  A lineman's elbow with his feet on the ground is most likely 6 feet, 6 inches off the ground.  The ball needed to travel 34 yards, meaning that if nobody blocked it, the kick would have been at a maximum 31 feet, 7 inches above the ground (assuming zero effect of gravity).  To visualize this, if the crossbar is 10 feet above the ground, that means the ball would most likely not have gotten higher than 2 more crossbars on a 34-yard kick.

My point is that Griggs kicked that one like the guy who tries to kick a field goal to win $100 in Kroger gift cards at halftime.

This blew another chance to go up two scores.

Up 8 with 8 minutes to go, Purdue played not to lose and ran straight ahead for 3 plays, gaining a total of 2 yards.  One more first down puts the Boilers in field goal range to basically seal the game.  And before you yell at me for being hypocritical, just know that Sam McCartney (not Paul Griggs) was warming up into the net on the sidelines.

Missed Opportunity #6: Two Punts Snapped With 15 Seconds Left On The Play Clock (BONUS: The "My sister could have executed that play better" Award)

Conservative play-calling was the hallmark of Purdue's fourth quarter as the coaching staff made sure to keep the clock running.  Purdue had 3 punts in the final stanza, yet on the first two (which were both set up on runs to keep the clock going), the ball was snapped with 15 seconds left on the play clock!  The snap is actually signaled by one of the "shield" backs who really aren't needed on shorter punts.  Seeing as both of these punts were from inside the 50-yard line, my sister could have easily waited to lower her hand until there were 2 seconds left on the play clock and then ran away.  Think 30 less seconds would have been valuable at the end of the game?

The Buckeyes ran Carlos Hyde up the middle for a successful 4th down conversion from their own 28-yard line.  A Purdue stop there gives the Boilers a chance at a field goal to seal the game.


This was already mentioned in the opening, but Brandon Cottom (who otherwise had a pretty nice game) had a boneheaded false start which pretty much had the Boilers thinking punt from the outset.  However, a first down on any of the next 3 plays seals the game. 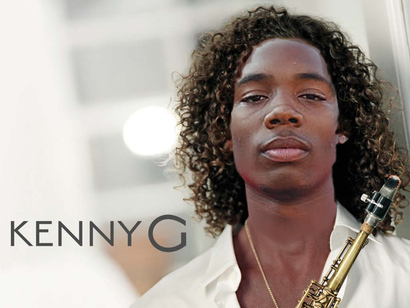 Kenny Guiton was 2 for 5 with 11 yards and an interception heading into the last drive.  With Ohio State having no timeouts and only :47 left on the clock, the prevent defense would have been fine.  If Purdue let the Buckeyes get 10 yards on every play (assuming approximately 10 seconds run off during each play - allowing for the first down stoppage and the spike), Ohio State does not score and Purdue wins.   So COVER THE LONG BALL!  Not only did the Boilers not cover Devin Smith, there was nobody within 15 yards of him.  That's a great way to give some confidence to a backup quarterback.

Missed Opportunity #10: OSU running the ball on 3rd and 2 with under 20 seconds left

Wow, that play took a lot of guts.  If the Buckeyes don't pick up the first down, the game is over.  Guiton couldn't spike the ball since it would have been 4th down, and Ohio State didn't appear to have another play called.  Even if they did, there would have been 5 seconds on the clock (at most) and Guiton would have had to heave a prayer to the end zone.


Missed Opportunity #11: Incomplete Pass Outside of the Endzone With 8 Seconds Left

This was Guiton's worst decision of the game and it nearly gave Purdue the victory.  If Evan Spencer catches Guiton's pass, the game is absolutely over.  There is no way the Buckeyes can line up and get the snap off in 8 seconds.

Enough said.  Good play calls, but if Purdue stops either play, they win.

Missed Opportunity #13: The Fumble That NOBODY is Talking About - Hyde Fumbled On His Overtime Touchdown Run!

Overtime seemed like a foregone conclusion.  Ohio State had the momentum and Purdue had stalled on offense.  Most Boiler fans (me included) felt the only way to win was going to be an Ohio State turnover.  This actually nearly happened, even though ABC/ESPN2 never showed it or commented on it.  Carlos Hyde fumbled the ball as he was leaping into the endzone, the ball hit the ground, and bounced right back up into his chest.   Check out the video of the last two OSU plays of overtime and watch the umpire run in to determine who has the ball.  He doesn't signal touchdown right away since he saw the fumble. Still don't believe me?  Check out this screenshot I took from the highlights package shown by BTN (who ALSO didn't mention it)... 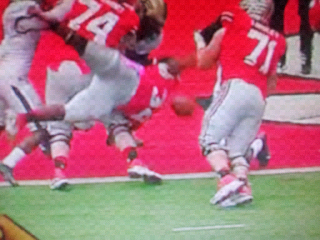 As you can see, this was not a muff, but a full out fumble that somehow bounced directly back to Ohio State.  Below are two pictures from the side view of the actual game footage. While it may be tough to see due to some major zoom, the football can be seen hitting the turf and bouncing directly back towards Hyde who is falling down.


Imagine if the Boilers recovered this in the endzone - it would have been another crazy event in an unbelievably crazy game.

Finally, while this was not evident from the tv broadcast, the jumbotron replay of the pass to Gabe Holmes showed that he dropped the ball even before he got hit.  Purdue would have had a first down at the 10-yard line, setting up a much different overtime series.  A touchdown there would have resulted in the most nerve-wracking extra point I may have ever witnessed.

That's 14 opportunities that Purdue had to pull off one of its biggest wins in decades.  And all 14 went against Purdue.  I know this wasn't quite the normal recap we normally do, but I could think of no better way to accurately describe recap this game.

Regardless of the missed opportunities, Purdue finally showed some life and a 5-3 record is still possible.  Wisconsin does not have an easy schedule left (OSU, MSU, and @PSU), so it's still possible they finish 4-4.  Gotta keep the faith - basketball season's still a couple of weeks away!
Tweet
Posted by Erik at 10:59 PM