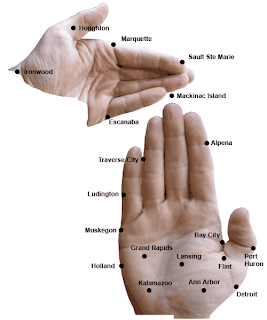 Big Ten season is finally here, and the Boilers face off against the Wolverines Saturday as both teams begin conference play.  The Wolverines hail from that state to the north known as "the hand," right near the heel, which I find very fitting.  This is the first game in a doozy of a three-game schedule for Purdue, who faces Michigan and Wisconsin at home, followed by Ohio State on the road.  Those should be the Boilers' toughest three games left on the schedule, so it's important they start off on the right foot with a win.

I spent eight days in Ann Arbor last week (you know what they say about her, right?) while the Wolverines had their bye week and twice as long to prepare for Purdue, and I learned a few things:

Why Purdue wins
If the Boiler defense can play like they've been, it should give Michigan a lot of trouble.  It's all about containing Denard Robinson, and Purdue has the athletes to do that and apply a lot of pressure in our out of the pocket.  Coming off a stellar game against Marshall, stud cornerbacks Ricardo Allen and Josh Johnson could torture Robinson worse than Notre Dame did.  If Purdue can force some turnovers and get in Robinson's head, they could pull out the victory.  Also, the defense should be able to keep Fitzgerald Toussaint in check this year, as he hasn't been dominant yet.

The Michigan defense is good, but by no means great, and they rank near the bottom of the conference in rush defense.  Expect the Akeems to have a good day in order for the Boilers to win

Why Michigan wins
I think the biggest factor for Michigan will be the fact they are coming off a bye week.  They had two weeks to prepare for Purdue, two weeks to forget about their bad loss to Notre Dame, and two weeks for Denard Robinson to relearn the game of football.

Michigan also boasts the best pass defense in the conference, so they could likely give Caleb TerBush fits on Saturday.  If they force some picks, and TerBush always seems willing to give one bad interception away each game, it could snowball.  Offensively, Robinson has the ability to change a game in a heartbeat and can beat you in a variety of ways.  If he plays at his talent level and doesn't get careless, like he did against Notre Dame, he's one hard dude to stop.  Remember that Toussaint rushed for 170 yards against Purdue last year, so even a modicum of that production could be the difference.

I couldn't find any Wolverines to make fun of, but check out Delonte Hollowell, who just looks hilariously awesome. Like he's a member of TV on the Radio or something.

So instead, let's remember how much we dislike this punk:

Picks of the week
Michigan is favored by three points, and this week Erik and I will be betting the value of the last good lunch we had at a restaurant.

Kirk's bet
I work from home, so I don't get out for many lunches, and even during my week in Ann Arbor I was working from my in-laws' house.  They served me gourmet lunches while I diligently helped save the world, but I suppose those don't count.  I'll think back to my most recent monthly trip to New York City, where I had essentially an all-you-can-eat meal at BonChon Chicken.  They do Korean fried chicken in soy garlic or hot sauce, and I ate my fill of wings, drums, strips, fries, pickled daikon radish, and kimchi coleslaw.  Probably about $20 worth. Good stuff.

The head or the heart? I think there's a decent chance Purdue pulls out the victory, and although the safe bet is to pick a UofM win, I'm backing my Boilers all the way to Indianapolis.  I have confidence in confidence. Purdue 27 - Michigan 24

Erik's bet
Because he's attended about two dozen weddings this summer (he makes a pretty bridesmaid), Erik was in Colorado Springs last week and enjoyed lunch at Phantom Canyon Brewing Company.  He doesn't remember what he ate (drunk before noon?), but he loved their Railyard Ale, and his bill came to about $25.

Erik predicts that the Wolverines cover the spread, Michigan 24 - Purdue 20 (Erik, I'm so disappointed in you).

Three Final Things
1. Will Robert Marve and Ralph Bolden return and be a factor in the game?  I don't expect either to, with so much on the line, unless the Boilers are struggling, but it's fantastic news that they each are recovering from injuries sooner than expected.  At a minimum it could give the Michigan coaching staff additional things to worry about.

2. Totally not football related, but I give Ann Arbor credit for bringing Ben Harper to the Michigan Theater for an amazing three-hour solo show while I was in town.  Erik's mentioned before on the blog that I'm a bit of a fan, and it was the best performance of the seven times I've seen Ben live.  Just him on stage with ten guitars, a piano, a vibraphone, and a ukulele.  I highly recommend seeing him on this short tour, especially Carnegie Hall next week.