Purdue - Eastern Michigan Recap: Winning Big When You Should


Good teams should easily beat bad teams.  On Saturday, Purdue took a much lesser opponent to task, just as they should, for the second time this season.  The Boilers started slowly but easily dispatched Eastern Michigan 54-16.  Since some of you may have changed the channel to watch more competitive games by the second half, time for some recap!

Overview:
A 38-point win means something went right, but for the first nine minutes, I was a little concerned.  After a slow start and a couple punts, Purdue finally made the Eagles look like the team that lost by 17 points to Illinois State (an FCS team).  Fortunately, the Boilers got their act together offensively and made it to the end zone on five of their next seven series.  Sure, there were two turnovers on those other two series, but a rout was in progress before it was even halftime with the score 33-9.  Purdue scored a few more times during the second half and gave up a meaningless fourth quarter touchdown, but it really wasn't all that interesting. The Boilers were simply faster, stronger, and better than the competition in nearly all respects.

The Offense:
Let's start off with showing some love to the running backs for their amazing day.  Sure, Eastern Michigan had one of the worst rushing defenses in the nation, but the Boilers took advantage in a big way. 392 yards were gained thanks to 11 different ball carriers, with Akeem Hunt putting up 106 yards (on only four freaking carries!), and Brandon Cottom almost hitting 100 (95 yards) with only two carries on one series in the second quarter.  Hunt also had a "reception" for a 50-yard touchdown that was really a glorified lateral, so we should give that credit to the running game and great blocking.  I'm excited to see what these guys (and Akeem Shavers, who had a nice day as well with 56 yards) can do against the Big Ten. 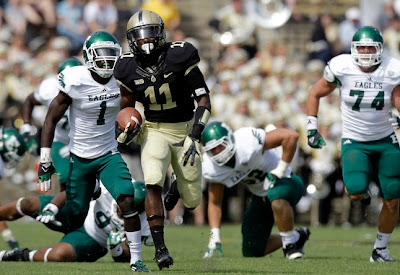 Caleb TerBush got the start and didn't have to worry about Marve taking over any snaps in the second quarter.  I was planning to see TerBush fired up, with the monkey off his back, but the first two series were worthless.  Despite the play-calling being suspect and definitely too conservative, TerBush threw three passes on each series which each resulted in a three-and-out.  After those six attempts, the stat line read three completions for seven yards.  I couldn't have been the only one screaming "but he 'gives us the best chance to start of well!'" at my television, as my disappointment turned into anger.

Thankfully, TerBush got the funk out of his system (and I learned after the game he was apparently pretty sick the night before), and he went on to lead the team to a bunch of points.  Did that redeem him?  Certainly, but hopefully the offensive unit under TerBush took advantage of the time to gel and won't start so poorly in future games.  The final line was 16/24 for 158 yards, two touchdowns (and a third on a keeper), and one interception.  That was fine against a bad team on a day when our running game was unstoppable, but still a bit concerning, especially since the interception was a horrible pick six early in the second quarter.  Also, take away the "pass" to Hunt mentioned above, and you're looking at only 108 yards on 23 attempts.

For the receivers, Antavian Edison was stellar, making some huge catches, turning receptions into big plays, and just looking like a stud who could out athletic anyone in the secondary.  It's really nice to see him develop into such a weapon, and with O.J. Ross being targeted on more shorter routes, it adds some complexity to the offense.  Thumbs down to Ross on his fumble that led to an Eagles field goal, but he was getting hit from a variety of angles I suppose.  It could have been very costly, as a touchdown would have given Eastern Michigan the lead, and it happened only two offensive plays after Terbush's interception, which took all the wind out of the Boiler sails. 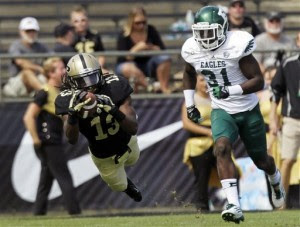 The Defense:
How many more times can we say we love this defense!  After a great first game and then holding their own against a very good (I just threw up a bit in my mouth) Notre Dame team (better than the vaunted Michigan State D did this week), the defense put on another clinic.  Eastern Michigan got their only relevant points off of two turnovers (TerBush's pick six, and Ross's fumble that put the Eagles in field position), and the rest of the day, the defense didn't bend or break.  EMU didn't make it into Purdue territory on their own until late in the second quarter, which still resulted in a punt.  Frankie Williams, Josh Johnson, and Landon Feichter all had interceptions, none of which were in garbage time.

The defensive line looked big and physical and gave Eastern Michigan's quarterbacks a lot of trouble.  It only resulted in a couple sacks and a few tackles for a loss, but their presence was certainly felt.  Ryan Russell left the game early with an ankle issue, but it didn't look too serious.

Special Teams:
The good: some great punts by Webster that pinned Eastern Michigan inside the 15, and a blocked punt by Taylor Richards that led to a Purdue touchdown.

The bad: nothing really special out of the return game, and the Eagles did have some more impressive kick-off returns, although let's be honest, they had a lot of practice doing that thanks to all the points the Boilers scored.

The ugly: redshirt freshman and former townie walk-on Sam McCartney missed two PATs.  That's pretty bad, and including having one blocked against Eastern Kentucky, that's three missed on the season.  Freshman Paul Griggs made all five of his against both Eastern teams, so I wonder if the job is now his.  We can't let an extra point cost us a game this year, obviously.

Coaching:
Worst coaching decision: I can't believe Coach Hope started TerBush again over Marve!  OK, haha, I'm kidding (but also secretly crying inside for Marve).  I was probably most upset by the vanilla play-calling to start the game.  Sure, you don't want to give anything away against a cupcake and spoil some of your most creative attacks, but the game plan for those first two three-and-out series was frustrating.  The first six plays were all passes, against one of the worst rush defenses in the nation?

Best coaching decision:  Handing the ball off.  Not sure why we came out throwing on those first two series (especially if TerBush was sick), but the decision to take a lot of looks on the ground with a lot of different guys paid off huge. 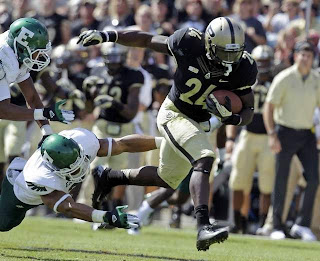 Worst Call by a Zebra:
I honestly didn't see anything that upset me.  The Ross fumble was the correct call, and while there were some cheap shots by the Eastern Michigan players, most were caught by the refs.  You know it's a good day when you can't complain about the officiating.  I think I already said that this season, too, which is a nice change of pace from previous seasons.

Most Important Play:
I'm awarding this to the "pass" to Hunt in the second quarter that results in a 50-yard touchdown run.  This stopped the bleeding after giving up 9 points on two consecutive horrible turnovers, and it was all gravy from there on out.  A nice quick flip from TerBush, great blocking from the line and receivers, and Hunt was a speed demon running by tacklers along the sideline. It also capped a 99-yard drive.  I've enjoyed watching this on replay at least 20 times in the last 36 hours.

The "My sister could have executed that play better" Award:
The reason for the 99-yard drive referenced above was because Purdue had to start a series at their one-yard line.  Wow, that must have been a great punt that was downed at the one, right?  No, it was on a kickoff after an Eastern Michigan field goal.  How do you start at the one-yard line after a kickoff return?  By bobbling the ball in the end zone, and fumbling it out of bounds just pass the goal line. My sister could have done that better than Raheem Mostert by not even fielding the ball in the end zone.  Another time when running away from the ball like a little girl would have paid off.

The Biggest Missed Opportunity
Other than starting the game out with more offensive authority, there wasn't much Purdue should have done that they didn't.  Early in the first quarter, I think there was a long pass to either Edison or Ross, and TerBush just plain missed the receiver.  That would have been a much better way to start, and hopefully TerBush can hit those in the future.

Picks of the Week Update:
Erik and I both correctly picked Purdue to cover the spread, and cheers to him for nailing the margin of victory.  My sweet Ben Harper CD takes me $12 in the black, while Erik's love of indie rock nets him $8 on the season. Consider my lead insurmountable.

In Conclusion:
Purdue got the job done, and despite the slow start and a couple misfires, looked good.  The defense and running game were the reason for the big victory, and it looks as they should both be formidable once conference play begins.  Up next, the Boilers have a by week before taking on Marshall, so there's plenty of time to rest up and plan for the next game, to avoid losing a winnable non-conference home game.
Tweet
Posted by Kirk at 1:00 AM