Five conference games played last week with only one result a surprise (Iowa winning at MSU), but some surprising margins of victory with Ohio State narrowly beating Indiana and Purdue getting owned by Wisconsin.  How sad is it that I'm almost more interested in watching the other Big Ten games than Purdue vs. Ohio State this weekend?

On to the rankings, where tears stream down my face as I rank Indiana ahead of Purdue. 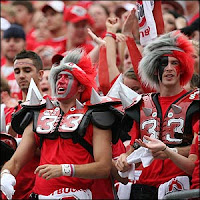 The Buckeyes had a hard fought win against Indiana last weekend, which should be a reason to drop them a few spots, since they almost let one get away from them.  However, they are BY FAR the best team in the conference right now, even though their defense needs some work.  Of course, that same defense is playing Purdue this weekend, so we know it'll get its act together since playing Purdue is good for what ails you.  Finally, how strange will it be if OSU goes undefeated only to not be eligible for the conference or national title game?  Could the AP voters still rank them #1 at the end of the season if there are no other undefeated teams?

Michigan got to easy weekends in a row.  First beating up Purdue, and then easily shutting out Illinois in Ann Arbor.  The Wolverines host Michigan State this weekend, but given how far Sparty has fallen, I expect them to win big.

No other teams did enough to pass Penn State in the rankings during their bye week, but we'll find out this weekend if they've really turned the corner when they play at Iowa. 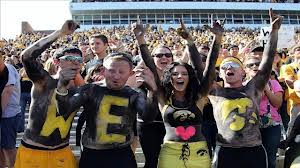 The Hawkeyes narrowly edged the Spartans in double overtime on the road.  This is another team that I'm not sure if they've turned the corner from a poor non-conference season, since they haven't beat anyone good in the Big Ten yet (MSU is NOT good).  We'll find out this weekend when they host Penn State in the battle to prove who's a fraud and who's really figured out how to win this season.

After losing their first game of the season to Penn State the previous weekend, Northwestern took care of business and beat Minnesota on the road.  It wasn't pretty (no points scored by the Wildcats in the second half), but a win's a win.  They host Nebraska this weekend, which could be a make or break game.  They still may have a special season (and at least they're bowl eligible), but they also have the chance to lose their next 4 games.
6.   Wisconsin (5-2, 2-1) [Last week's rank: 7] 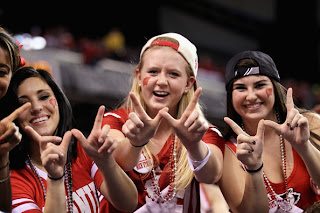 Sure, Wisconsin destroyed Purdue, but right now that seems to be the thing any halfway decent team can do.  Ball ran for 247 yards, but I'm not impressed enough to move them up until they beat someone else since they've only beaten the worst two teams in the conference right now.  If the Badgers crush Minnesota just as badly this weekend, maybe they'll see their name a couple spots higher in the power rankings.  They're also the only post season-eligible team in the Leaders division with a conference win, that's how bad things are in the Big Ten.

The Huskers hover around the same spot after a bye week.  Other conference teams are improving, and Nebraska can prove they're doing the same with a tough slate of Northwestern and Michigan the next two weeks.

Minnesota lost to Northwestern last weekend, which isn't a big surprise.  Despite their undefeated non-conference record, they haven't beaten anyone in the conference and they may struggle to make it to 6-6 and bowl eligibility.  They're best odds of a win are against Purdue and Illinois, and they should get throttled by Wisconsin this weekend (although look for them to put up more effort than the Boilers did).

The Spartans started the season strong as a favorite to win the Legends division, but of their last five games, they've lost three and only beat Indiana (barely) and Eastern Michigan (who is winless) by two scores.  MSU lost to Iowa at home in double overtime last week, and Andrew Maxwell had a completely ineffective game behind center (other than a couple plays, sound familiar Purdue fans?). His interception in overtime cost Sparty the game.

Let's give the sad Hoosier football team some credit.  They may not be able to win a big game, and they lost yet again to Ball State this season, but they are at least competitive and make their games fun to watch.  They challenged Ohio State and got some lucky bounces to trim an 18-point deficit to 3 in the final two minutes.  I'll be pretty happy if the Boilers can put up 481 yards of offense against the Buckeyes this weekend.  IU gets an easy win this weekend against a horrible Navy team and then plays Illinois for what should be their first Big Ten win in a couple years.

The Boilers are in a freefall.  IU passes them purely because they've played their big games (all still losses, of course) far more competitively.

The Illini still can't make their offense work, getting shut out by Michigan and only managing 134 total yards. Boilermaker fans are just happy there's a team bad enough to continually stay below Purdue in the power rankings. At least Illinois won't lose this weekend - they have a bye. 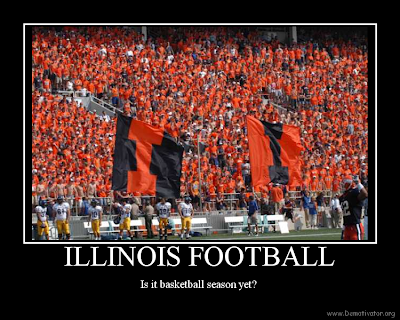