As a Purdue fan, I'd like to forget the last week of football actually happened, but my sorrow is shared by a lot of the conference as there's just so much dang mediocrity to go around.  Other than Ohio State, no one looks great, everyone looks content to win a few and lose a few, and there is a huge black-eye for the conference as no team is ranked in the coaches poll.  New slogan this year: Big Ten Football, Feel the Apathy!

On to the rankings, where the top team stays the same, as do the cellar dwellers, but we see a meteoric rise for a team previously ranked dead last. 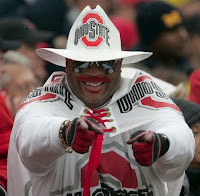 The rich get richer, as the Buckeyes destroyed Nebraska last weekend.  Braxton Miller only had to complete seven passes (throwing 14 total), because Ohio State could move at will on the ground, racking up 371 yards rushing and taking advantage of four turnovers (three INTs thrown by Taylor Martinez).  Expect another big win for the Bucknuts this weekend at Indiana.  Isn't it just fantastic when the best team in the conference, by far, isn't even eligible to play in the conference title game or postseason? 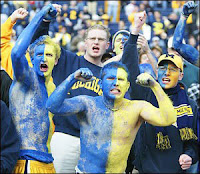 I don't want to give this much love to the hated Wolverines, but they rocked the Boilers and showed how they possess the talent to put up lots of points and actually play some rush defense.  Of course, it was against a seemingly nonexistent Purdue game plan, so maybe I'm overrating them just a bit, but still, it's the old days of the Big Ten with OSU and Michigan sitting atop the conference power rankings. Denard Robinson is a very good player, don't get me wrong, but some team (like Notre Dame) can figure him out and not give up 235 yards to his legs on 24 carries.  That team might not appear on their schedule until late November at Columbus though. 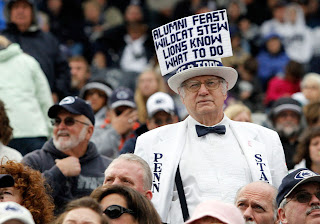 That's right, the Nittany Lions, formerly dead last in the power rankings, are now sitting in the top three.  What is going on?  I thought Northwestern would win in Happy Valley, but Penn State had a great fourth quarter to pull out the victory.  Do I think they are a phoenix rising from the ashes with the chance to win the division?  Definitely not, but they are going to be a much tougher game on the schedule than many people thought (myself included), and I'm glad Purdue gets them at home later this season.

I'm so disappointed in you Wildcats.  Here I was promising a 7-0 start, and you blow your first solid chance to win at Penn State since 2004.  You were even ranked, and now no one will take you seriously.  What went wrong for Northwestern?  Leading after three quarters, they gave up three fourth quarter touchdowns.  We knew the defense was a problem, after watching them have trouble stopping Indiana the week prior, but the offense wasn't as effective with Kain Colter shutdown.  The two-headed QB monster was really just a short passing game from Trevor Siemian, and that's not going to cut it in the Big Ten.

Michigan State should have beat Indiana by more, but they won, and they stay above Nebraska in the rankings thanks to their narrower loss to common opponent Ohio State.  This MSU team is a perfect example of the mediocre middle of the Big Ten.  Team's that should be better are underperforming for unknown reasons, and all the mediocrity is going to beat up on each other this season, leading to no clear top team(s) (at least none that are post-season eligible).

Nebraska got destroyed by Ohio State, as many teams likely will this season, and they drop considerably in the rankings because of it.  The Huskers still stay above Wisconsin thanks to their head-to-head win, but no team in the Legends division is looking dominating, so they still have a great chance to make it to Indianapolis.  Nebraska has the week off, so they can sit in a corner and think about what they've done wrong, especially Taylor Martinez and his three interceptions.

You really don't get to move up much in the power rankings when you beat Illinois, since the Illini are playing like an FCS team right now.  I still don't think Wisconsin is that good, but we'll see how they handle Purdue this weekend.  Losing to Purdue will prove my point, although the Boilers are struggling just as badly. Other rankings are still giving the Badgers too much love based on their potential and lofty preseason expectations.

Boy did the Boilers suck against Michigan.  I'm not sure if they should be ranked even lower, but we'll find out when they host Wisconsin this weekend for Homecoming.  I've lost a lot of faith in this team, but I'm looking forward to being proved wrong, I'm just not holding my breath for it.

Bye week. Iowa will face Michigan State this weekend and might be able to take advantage of the plummeting Spartans.

Bye week.  The Gophers still have to prove they can beat a conference opponent, and they get a chance against a beaten up Northwestern team.

The Hoosiers squandered a 13-point halftime lead and fell to the Spartans.  IU could only muster 47 second-half yards.  Give them a little credit for hanging close with MSU and building a lead, but that's both a testament to how over-rated the Spartans were this year, and how bad Indiana is at playing all four quarters. A week after running the ball decently against Northwestern, they couldn't even manage 40 yards on the ground, but the passing game with Casey Coffman looked decent.  Indiana has the ability to maybe win a couple Big Ten games this year (obviously Illinois being one of them), and pull and upset here or there, if they can play a complete game.  Good luck doing so against Ohio State this weekend.

Another week, another Illini loss.  Scheelhaase threw for a touchdown and was the team's only rushing threat, which isn't nearly enough to beat a good or even mediocre team.  He's no Braxton Miller. It's going to get ugly when they face Michigan this weekend.