The broadcast recap segment of our site is typically a humorous look at the follies of watching a game on BTN.  If you're looking for a place to wallow in self-pity and read about how we now need to beat either Penn State or Iowa to even consider making a bowl game, I'm sure our upcoming recap will be the place for you.  Meanwhile, here are a couple of things you missed if you didn't watch the game on BTN... 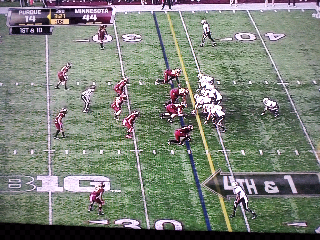 Oh, and in case you forgot about this one, here's Antavian Edison standing wide open in the end zone (top of screen) as he was never covered.  TerBush NEVER looked his way, either before or during the play.  Even though a much more difficult touchdown was scored on the play, it was clear that TerBush never really had his head in the game.  When watching Marve in the second half, he looked both ways on every single play just to see if anything weird was going on.  Like nobody covering a wide receiver... 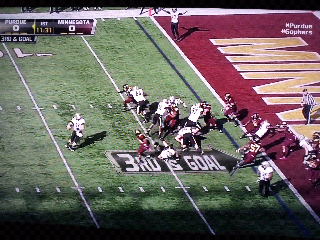 Marve has been named the starter for next Saturday's game...just look at the above picture for one of many reasons why.


Thing I learned from BTN: BTN Connect is more important than the game itself.  How many times did Eric Collins say, "Oh, I bet Philip Nelson is trending right now!!!" instead of "Great pass by Philip Nelson"???  It was awful.

Further research tells me that BTN Connect pretty much creates its own twitter-verse out of existing tweets.  That may be a difficult explanation to understand, but here's something that's not - if I actually cared about BTN Connect, I'd go check it out myself.  I don't need Purdue's de facto announcers (Collins and Rackley have done half the Purdue games this year) to ruin my in-game experience by telling me about twitter trends.  The Boilers do a good enough job of ruining my in-game experience themselves, thank you very much.

Announcer complaint:  J Leman - someone featured here so often that we're thinking of naming this segment after him - gave us this gem prior to the game (talking about Minnesota):

Also, anyone notice BTN showing Kawann Short getting his ankle taped up, followed 30 seconds later by him wearing street clothes on the sidelines?  Collins and Rackley didn't miss a beat, even though they clearly were showing hour-old footage.


Comment of the Week - Wife Edition:  "Your phone's lighting up with derogatory text messages.  What's the score?"  "Oh, makes sense.  Why don't the coaches put in that other quarterback - he can't be any worse, right?"
Tweet
Posted by Erik at 9:10 AM