Make sure to check out Kirk's recap of Saturday's game and his always entertaining (and 100% accurate) power rankings!  Meanwhile, here are a couple of things you missed if you didn't watch the game on BTN...

Screenshot of the week:  Jordan Foster, one of the Silver Twins, appears to be celebrating the win early as she shows the proper way to drink a shot of tequila to the Golden Girl and Girl in Black.  Thanks to BTN, the whole world now knows that you need to lick the salt BEFORE taking the shot. 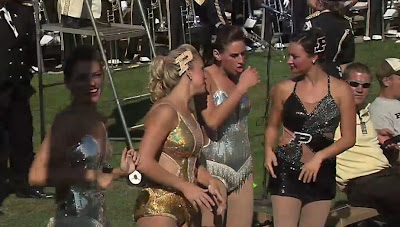 Also note the guy in yellow checking out the Girl in Black.  You can't hide behind those sunglasses!

Thing I learned from BTN: Color commentator, Derek Rackley, sounds a lot like Norman Chad on ESPN's World Series of Poker broadcasts.  Except less funny.  Don't believe me?  You'll get a chance to hear it from yourself next week, because...

Announcer/BTN complaint: Purdue's biggest game in years is on BTN this Saturday.  Your favorite commentators, Eric Collins and Derek Rackley might have spent all week hanging out at the Union Club, where they're joined by linebacker turned faith healer turned sideline reporter, J Leman.  Oh Charrisa Thompson, we miss you!  Even worse, is that next weekend will again be Purdue's biggest game in years and will almost definitely feature a team in the Big Ten Championship.  Yet that game is ALSO on BTN.  Where's the love?  ESPN/ABC might pick up the Ohio State game, but if Purdue makes the Big Ten Championship, the nation's going to have missed 2 of the 3  biggest games of a team that will be one game away from the Rose Bowl.  Oh, and please don't let us have J Leman for a third straight week.


Irrelevant Comment of the Week - Wife Edition:  "Are you seriously watching the game on your phone while on vacation?  You're pathetic."

As much as I dislike the announcers and production value on BTN, thank goodness for BTN2Go!
Tweet
Posted by Erik at 11:13 PM