Kirk released some venom in his recap of Saturday's game - make sure to check it out.  Meanwhile, I normally use this space to review the broadcast of the game, however I traveled the 6 hours from Cleveland to West Lafayette for this one, so here's what you missed if you weren't at the game...

Screenshot of the week:  After watching the replay, I feel BTN did a poor job emphasizing how hard it was actually raining out there.  It was raining so hard and was so miserable that my wife and I left the game with 5 minutes to go in the 4th quarter.  I have attended over 350 college or professional games in which I had a rooting interest in my lifetime (yes, I spent the whole day counting), and this is only the second time I have ever left a game early. I've been through blizzards in Cleveland Browns Stadium, I've been to games with 3-hour rain delays at Jacobs' Field, I've been to blowouts both for and (usually) against Purdue and Cleveland, and yet the only other game I've left early is a Yankees-Indians game in 1994 that got suspended due to the old American League curfew rule.  We sat through 3 rain delays, but eventually left at 12:50 AM as my 5-year-old brother was getting tired and we knew we wouldn't get to see the end of the game due to the curfew rule.

That's how miserable it was on Saturday.

So, while it would be easy to lay the blame on the program for the screenshot below (taken with 4:00 left in the 4th quarter), I'd lay the blame mostly on the weather. 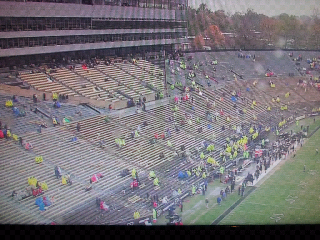 Although, I would've stayed if Purdue had any chance of coming back...


Thing I learned from Ross-Ade: I was pretty impressed with how well-stocked the Ross-Ade vendor stands were with ponchos.  We stood in line for a half-hour (before, during, and after halftime) with thousands of other fans who read my "76 degrees and partly sunny" forecast in this week's preview, and sure enough there were still ponchos available when we got to the front.  This led to a conversation as to how difficult it would be to prepare the poncho inventory - you either get zero people buying them or 10,000.  Perhaps that's why the ponchos they're selling are "yellow gold" instead of "old gold" - they probably ordered 500,000 back in the 90's and they're still trying to get rid of the old colors.  The 2nd half would have been nearly unwatchable without them, however I'm wondering now whether I would've rather had them run out and force us to leave at halftime.

West Lafayette complaint: I'm able to make it up to Purdue for one football game and one basketball game per year.  One of our favorite traditions has been to go to Boiler Market before the game to drink beer, get a seat by the window, and watch Breakfast Club in all its glory.  However, Boiler Market closed in April, and now only Harry's, Jake's, Brother's, and Where Else are serving beer on the hill before 11 AM.  Each of these places are always packed wall to wall for Breakfast Club and have long lines to get in - definitely not what we were looking for.  It's always nice to have an option outside of tailgating (especially when you only have an hour or so to drink), so here's to hoping Mad Mushroom and Insomnia Cookies keep the liquor license in their new digs and provide the awesome alternative that Boiler Market has for years.


Comment of the Week - Wife Edition:  "Look - I built an umbrella for our pretzel!"

This week I'm off to Columbus.  I really wish they served beer at college football games - I'm going to need it.
Tweet
Posted by Erik at 9:57 PM

Email ThisBlogThis!Share to TwitterShare to FacebookShare to Pinterest
Labels: Broadcast Recap, Screenshot of the Week, Wisconsin