I've been putting off this game wrap-up as long as I can.  Erik and I usually let the game marinate for a day before writing our reaction to Saturday's results, since we know we aren't the first site you check for play-by-play news,  Hopefully that gives us the chance to be more reflective, but this week it's just given me longer to stew.  But I deserve this.

You see, last week, after the Boilers were destroyed by Michigan, I texted Erik relieved that he was scheduled to write the wrap-up post and not me.  I gave him a bit of a hard time, and I set my sights on next week.  Who wants to write an essay about how much their beloved team failed?  Friends, that's my job today, and it sucks.  My only consolation is that at least I wasn't there to have to watch that dreck in person.

Purdue lost to Wisconsin 38-14 on Saturday.  In a game that we mistakenly thought was going to actually matter, potentially determining the winner of the Leaders division (oh, you better believe that happened!), Purdue showed up for the first 38 seconds and then decided that was enough.  Sure the players still took the field and chased after Montee Ball, half-heartedly trying to tackle him to no avail, but it was as if they had no confidence in their ability to win.  And this was only the second quarter, trailing by just a touchdown.

Wisconsin eventually put up 645 yards of total offense, including 467 on the ground (247 by Ball), and Purdue could only manage about 125 yards per air and ground while rotating three quarterbacks.  Fans got to sit and stare at a steaming pile of crap. 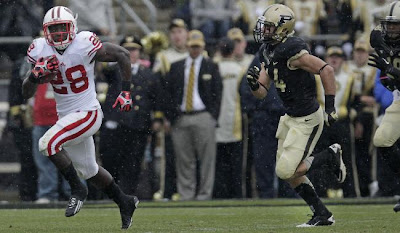 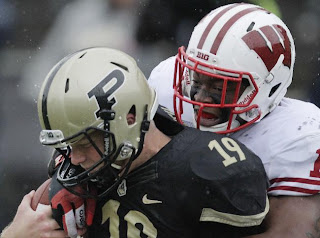 Sucked.  Hope played all three quarterbacks (surprised he didn't call Sean Robinson back into the fold, too), and none of them were effective after the early bomb by TerBush, going 11 for 31 for 124 yards.  Lots of passes thrown behind the receiver, vanilla play-calling for most of the game, and none of the signal callers seemed to be in rhythm.  Anyone else feel like the "players' coach" promised all these guys a certain amount of playing time, and because of that, won't make a decision to pick a guy and stay with him (or give Marve the reins over TerBush)?

The running game couldn't find any holes, and until a late fourth quarter 81-yard touchdown run by Akeem Hunt, the Boilers had only mustered 47 yards on the ground on 27 carries.  Some horrible sacks are also a cause for those atrocious numbers.  The offensive line looked like an FCS team as they couldn't create gaps or protect the quarterback. 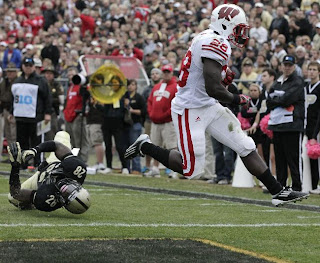 New slogan? "Playing Purdue: good for what ails you!"

Was decent (hooray for not sucking!).  Cody Webster had some great punts, and he had lots of practice with eight total.  Four were downed inside the 20-yard line, and two of those pinned Wisconsin inside their own 3-yard line.  But of course, one punt was blocked (in the third quarter, well after the Boilers had given up), making that three on the year.  Ridiculous.

Akeem Hunt had a great kickoff return to midfield to start the game, and Raheem Mostert had a 57-yard return in the first quarter that would have led to points of TerBush hadn't thrown that interception.  The best returns of the game, on Purdue's first two opportunities.  At least special teams tried to start the game off on the right foot.  It's a shame Mostert will miss the next two to four weeks with a knee sprain.

Kawann Short also got a finger on another field goal, causing it to go off target in the second quarter.  This gives Short the school record with six blocked field goals.  Purdue didn't attempt a field goal.


Coaching:
Best coaching decision: What a great play call to start the game!  A 52-yard bomb to Antavian Edison downed right before the goal line.  I was so excited.  I should have stopped watching there and celebrated the impending victory in my own little happy place.  Best coaching decision, by far, all day.

Worst coaching decision: Hiring Danny Hope in 2008.  I'm not a mean guy, but I'm honest.  I guess that's more of a "Worst Morgan Burke decision," but if I start that section, I'll be writing this post for the next two days straight.


Worst Call by a Zebra:

In a game like this, there's no reason to even mention the officials.  Purdue was only called for three penalties on the field.  Off the field, the entire coaching staff should have been flagged repeatedly for "wasting my time," "blowing smoke up my rear," and "failure to prepare."

There were two; one I'll highlight here and the other in the following section.  First, the interception thrown by TerBush on the Boilers' second drive in the first quarter was critical.  With the game tied 7-7, and Purdue in scoring territory, TerBush threw a pass high to his receiver that sailed into Badger hands.  Up until that point, the offense was moving the ball well, and that was the last time they did until garbage time.  It's like the game plan was, "if TerBush throws a pick, let's all roll over and play dead the rest of the game," or "let's only call the most expected and mundane offensive plays imaginable, they'll never see THAT coming!"  I'm still torn on who to blame for the pick.  The throw was very high, but it seemed to go right through the Crosby Wright's outstretched hands.  Does it matter?

The "My sister could have executed that play better" Award:

With the Boilers trailing by only 10 points, Robert Marve was in the game leading his second drive.  After two nice completions, he had Purdue in field goal range with about 20 seconds to play.  Marve scrambled, couldn't find an open receiver, and took a 13-yard sack that made a field goal impossible.  You simply cannot let that happen.  Last week, Marve ran out of bounds behind the line of scrimmage instead of throwing the ball away.  This is a fundamental flaw, and for all the fans pining for Marve to be the starter, please note these poor decisions he has made.  He may have cost Purdue 3 points on that play, and any, and I mean ANY, points to give the team even a modecum of confidence going into the half would have been useful (and kept the deficit to one possession).  My sister would have easily thrown that ball away to avoid getting sacked by a 300-pound dude.  Sure, she would have barely thrown the ball past the original line of scrimmage, but at least she would have kept Purdue in field goal range.

This entire game was a huge missed opportunity.  See above for the two plays that were most costly (in my eyes) other than the countless missed opportunities to tackle Montee Ball, including Sean Robinson nearly bringing him down in the end zone for a safety in first quarter.  Two times the Badgers had to start inside the three yard line, and both times the Boilers failed to stop them and force a dangerous punt, giving up big runs to Ball each time.

Picks of the Week Update:

I'm looking forward to Erik's mea culpa after criticizing the fans who "didn't believe" after last week's loss to Michigan.  He loses his $30 concert ticket for the audacity to pick a Purdue victory, and I gain $25 for picking with my head and not my heart.  I'm back in the black with $11.50 leading Erik's $9.00.  Wow, I'm sooo excited.  It's so fun betting against the team you love, right?

The vast majority of the fanbase is calling for Danny Hope to be fired.  And I rightfully expect that to happen once the season concludes.  However, I think there is no chance Burke fires him midseason, and until that point, let's support the team and "hope" for a turnaround.  There are six games left, and while the odds of winning in Columbus next weekend are virtually non-existent, the other five games are winnable (at least by what we had seen through the first 4 weeks of the season).  What if Purdue starts 0-3 and runs the table to end 5-3 and second in the division?  Look at me - ever the optimist even when I'm repeatedly let down - I call it battered Boiler syndrome.  In actuality, we probably won't even beat IU this year unless something changes, and fast.

Also, it's horrible to see pictures of an empty stadium during the fourth quarter posted all over the internet, and while I wasn't at the game, I can't blame a single person for leaving early.  The weather sucked, the product on the field sucked, and there was far more fun to be had at Homecoming tailgates.  It's disheartening and looks horrible for Purdue on the national stage, but it's deserved right now.