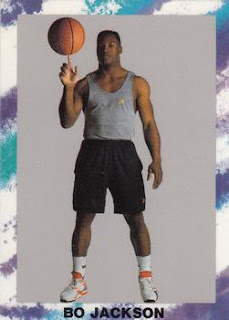 Welcome to the Big Wisconsin Power Rankings.  That's right, the Big Ten is Wisconsin's playground, and everyone else is just visiting. In a week packed full of big games, the Badgers win at Indiana was the definite highlight.  It's also becoming very clear that non-conference records mean very little as teams like Illinois are being exposed and falling flat on their faces.  Is the Big Ten still the best conference in the country.  I definitely think so, but this NCAA season seems like one where there are a lot of very good teams, but no truly GREAT ones.

On to the rankings, where Bo Knows Basketball (side note - want a surefire way to feel old?  Current college seniors were not born yet when those ads were running).

After huge wins at Indiana and against Illinois (by 23 points!), the Badgers are shocking all the experts with their 4-0 start to conference play.  Bo Ryan continues to combine above-average players into teams that run like a well-oiled machine.  Talk about someone who is a fantastic coach (as opposed to his opponent earlier this week).  Just another year where pundits expect Wisconsin to break its streak of consecutive conference top-4 finishes only to see them prove everyone wrong.

Michigan bounced back from a rough game in Columbus to pound the Gophers in Minnesota.  I was very impressed with how good Michigan looked on the road for the majority of the game last night in an incredibly physical game (yes, the Gophers are thugs).  The loss at OSU doesn't change the fact that Michigan should be competing for a #1 seed come March.  Trey Burke continues to be all-world, averaging 18 points and 7.2 assists per game.

Watching the Hoosiers flounder against Wisconsin this week was a thing of beauty.  They weren't as smart or physical as they needed to be, lacked senior leadership, and have a coach who got completely owned.  Crean's Hoosiers have never beaten Bo Ryan, and it's nice to see this game make even the IU faithful have to admit that Crean is a below average in-game coach.  Not only is the guy classless, ridiculous, annoying, a sore loser, immature, and about as fake as they come, he's also not worthy of coaching the talent he's recruited.  I rip on Purdue at times for playing "young" or making unwise decisions, but when veteran players on the most hyped team in the country are making the same mistakes and can't even run their offense through their best player in the second half, it's major cause for concern.  Any fear IU put into opposing teams is dwindling fast.

The Buckeyes only played once this week, beating Michigan at home.  That was a good win for them, but I still have trouble overlooking their horrible black eye - getting destroyed by Illinois a couple weeks ago.  It's the only bad loss on their schedule (the other losses were to Duke and Kansas, unsurprising).  A win this weekend at Michigan State will make them a real contender for the conference title, especially since they only have to play Minnesota once this season and it's at home.

A rough week for the Gophers, who lost at Indiana and somewhat badly to Michigan at home.  I'm not sure if they're being exposed as not able to hang with the top-tier teams, or if they just had a road bump.  Their schedule isn't terrible the next two weeks, so it gives them lots of time to recover physically, and this team must be very physical to win.

Michigan State is not nearly as good as their conference record.  They were easily beaten at Minnesota in the only game they've played against a ranked Big Ten opponent (and they haven't played the currently-unranked Badgers yet).  Two thirds of their remaining schedule is against teams likely to be ranked, so expect Sparty to get exposed.  Who knows, maybe by then Branden Dawson will actually get suspended for a game for acting like a punk.  Oh wait, I forgot that Izzo is now soft and has lost almost all credibility.  That'll never happen.  I love how he benched Dawsen and Payne for the first half against Penn State, but when he realized he might lose the game, he put them back in.  Classy.  Makes sense that he's such good friends with Tom Crean.

Purdue did what they needed to do and beat two bad teams this week.  There is still a lot of basketball to be played, but the Boilers freshman are developing and they should be able to hang with most teams at home and be able to win against bad teams on the road.  That may be enough for a 7th place finish in conference, but there's a big gap between the top 6 and the bottom 6 this year.

Even though Iowa crushed Northwestern by 20 points this week, they've proven that they're not quite ready to be prime time players.  The Hawkeyes are formidable at home but can't beat anyone good or on the road.  Their conference losses are all to ranked opponents. and now they have two more tough games against Wisconsin and at Ohio State before the schedule gets a bit easier.  Being so roughly front-loaded, Iowa could make a run to the middle of the standings as the season progresses, but they're inability to win on the road may keep them out of postseason play in March.

What a strange week for the Wildcats.  They lose by 20 points at Iowa only to travel to Illinois and put a whooping on the Illini.  Either they got lucky or Illinois is really horrible, but either way, I still don't have much faith in Northwestern.  Reggie Hearn can turn it on, but if he's not having a great game, NW won't upset anyone else.

After having the Illini ranked 2nd in my poll earlier this season, they continue to do what I warned against and tank in conference play, just like last year.  Over less than four weeks they've gone from 2nd to 6th to 10th. Live by the three, die by the three.  Illinois has lost two conference games at home by double digits, the most recent being to Northwestern.  That's got to make Illini fans furious, since NW isn't anything special this year and yet they were trailing by 17 points during the game, losing by 14.  Seems like this crop of players has trouble getting motivated and playing intelligent basketball.


I'm giving a two-way tie for 12th place, completely skipping the 11 spot since neither team deserves it.  The pitiful Nittany Lions and Huskers still can't seem to win a conference game.  At least they play this weekend (at Penn State) for round one of the battle for last place in the Big Ten.
Tweet
Posted by Kirk at 3:13 PM