Why is writing about these losses so dang hard?  You can tell Erik and I take our dear time to process what went wrong when the Boilers aren't victorious, and if you read his recap of the Michigan State game, you'll see why.  It could be appropriate to start this post again complaining about poor officiating, but the last thing we want is to be known as "those guys who always blame it on the refs."  And honestly, I used to be far worse than Erik, and I'm still pretty bad (it's that whole injustice thing), but while the officiating was horrible again, sometimes it went Purdue's way and often it didn't.  Them's the breaks.
Instead, the Boilers lost by ten to Ohio State for a variety of other reasons that they can actually control in the future:

I also have to comment about moving screens.  Like holding calls in football, they are one of my biggest pet peeves in the college game because some teams seem to constantly commit the foul, only to never (or rarely) be called.  It's a distinct advantage to play (and coach) that way if the refs aren't going to call it (just like holding).  I was thrilled to see one (or two?) call on OSU in the first half (and one on Purdue?), but then the whistle stopped being blown, and I have no idea why.  They were horrible, and they seem to always be when playing OSU and certain other teams.  In the second half, I don't think Amir Williams set a single clean pick.  It's hard for man defense to fight around a screen that keeps shifting illegally, so it puts the Boilers at a distinct disadvantage.

Overall, this was a game we all expected to lose three weeks ago, so let's not get all bent out of shape.  Yes, it was a horrible missed opportunity, but this season Purdue is playing more for development than any actual post-season prize.  Hopefully games like this will just make the team more determined and hungrier to win in the future and they can work on the things outlined above.

p.s. the gold and black stripes in Mackey looked awesome! 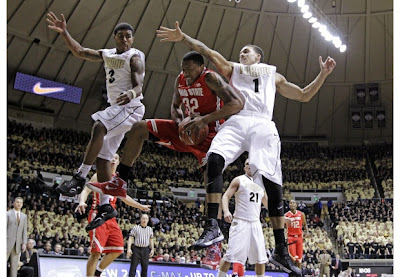