What an impressive showing by the Boilers!  It was so impressive that, for most of the country, CBS decided to leave the game in the last 10 minutes to show a more exciting one.  I had two reactions to this.  First, it really pissed me off, since I was watching on delay and couldn't pick up the live stream online.  But then I realized, Purdue just played a big game on national tv, and it was such a blowout with ten minutes to go that West Virginia had absolutely zero chance of coming back. Awesome!  So here's what I saw in the first 30 minutes...

- Matt Humphrey got only his second start of the season for the Mountaineers after being a starter for both Oregon and Boston College over the last four years.   He hit a 3-pointer early on but got into foul trouble and wasn't much of a factor.  Perhaps one of the reasons he isn't starting much is that his on-court mannerisms are a little...peculiar.  3-minutes into the game, Humphrey played an entire 25-second offensive possession with his jersey IN HIS MOUTH.  He even got the ball and took a couple dribbles with a jersey that looked like a turtleneck.  They never showed a closeup of it, so here's a really blurry zoomed-in picture to prove it to you.  What a weird dude. 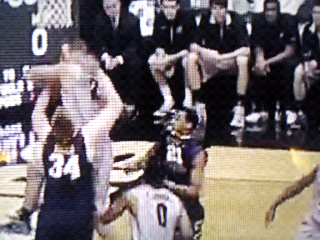 - Davis looked really solid out there and seems to be the calmest player on the team.  In fact, I think that in a crunch-time situation, I'd rather have Rapheal Davis taking a game-tying three than any other player, including DJ Byrd.  Byrd has been excellent recently and was awesome against West Virginia.  However, DJ gets a little excited sometimes and on big shots he can get a little too amped up.  The Boilers will have another game come down to the wire, yet I highly doubt Painter will draw up a play for the freshman.  It's too bad, because I'm really excited to see Davis develop and become someone who can hit the dagger.

- This Boilers seemed like they played the perfect game, yet they turned the ball over 16 times, gave up 15 offensive rebounds, and shot 62% from the free throw line.  This team is A LOT of fun to watch when their playing like they did on Saturday.  And amazingly, there's still room to play even better.

It was a fun win that has the entire fanbase buzzing about this team's potential.  Still, the NCAA tourney is a long ways off.  If the Boilers are going to make a run for it, they're going to need some signature victories.  I think a good start would be a road victory over a top 5 team. We don't have any of those coming up, do we?