What else happened in the game?  AJ Hammons had a great game as expected, approaching a triple double with 14 points, 8 rebounds, and 6 blocks.  He also dished out three savvy assists and only turned the ball over once.  Every game gets me more excited for the future thanks to AJ. 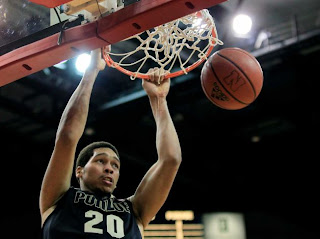 Ray Davis got the start again as Painter went small.  While he only had five points in 28 minutes, he pulled down seven rebounds, second on the team to only AJ's eight.  Playing with the starters, Davis likely won't have as many scoring opportunities (he only took two shots), but it was nice seeing him do lots of little things and play strong defense.

Byrd got a lot of praise for his four second-half three pointers, but he still shot just 4 for 10 on the day.  He missed all five of his first-half attempts, including three misses in less than two minutes.  Purdue needs him to be a three point threat, so consider me happy he's making some, but the cold stretches are still concerning.  If he didn't get hot later in the game, the Nebraska comeback could have gotten really ugly.

I know Painter is seeing how well the small line up works, but where did Jacob Lawson go?  My favorite energy guy and physical defender only saw five minutes of action.  We'll need him badly against more physical Big Ten teams, so I hope nothing's wrong, be it physically or with his attitude or work ethic in practice.
Purdue held Nebraska to 33% shooting, which is fantastic (and they didn't miss as many easy layups as Penn State this weekend), but they only forced two turnovers (Purdue gave it away 12 times).  That, coupled with giving up 13 offensive rebounds are the only stats that really concern me.  A lot of that had to with the Boilers having stints where they lost a bit of hustle, either staring at the shot instead of crashing the glass or not making life hard enough for whatever Husker had the ball.  As a result, Purdue only had a single steal on the night.

While the team missed four straight free throws down the stretch (including one front-end of a 1 and 1), prior to that they were shooting well (9 of 12).  Still, seeing Ronnie, Terone, and DJ all miss opportunities to secure the victory is frustrating, but fortunately the lead was large enough where it wasn't necessary.

Purdue now stands at 3-2 in conference play, having played three "top-tier" teams (Michigan State, Ohio State, and Illinois) and two lower teams (Penn State and Nebraska), so their record isn't improperly weighted like some).  I'm pretty satisfied with that result so far and think there are going to be some fun surprises in conference play over the next few weeks.  If the Boilers can stay poised to take advantage, a chance at post-season play seems more feasible.
Tweet
Posted by Kirk at 3:25 PM