Games like these are great when you're swamped at work and trying to write a short recap during lunch.  Much easier to quickly talk about a blowout win than try to write a brief synopsis of why I hate all refs.  You all know I can't keep those brief.

A couple observations from the game:
- Rapheal Davis got the start after the small lineup appeared to make headway versus Ohio State.  Over the years, small lineups have been Matt Painter's bread and butter due to injuries - could this be the lineup that he sticks with the rest of the year?  However, it was very evident that the big lineup wasn't out there as Purdue ended up getting outrebounded on the offensive glass - a rare occasion so far this year.  It's a give and take, although I think I like having another potential scorer and lock down defender out there.

- Anthony Johnson took a couple of hard hits and was really laboring in the first half.  He still played 21 minutes, but for someone who takes most of his shots from inside the lane, we really need him to start shooting better than 33% from the field (he's shot 33% in each of the last four games).

- As the radio play-by-play guy of the Cleveland Indians over the last 20 years, Tom Hamilton might be my favorite announcer.  The excitement he gets in his voice while still painting the picture for the viewer/listener is unmatched in broadcasting (Gus Johnson gets excited but usually speaks gibberish while he's doing it).  I'm such a big fan that I even have his bobblehead.  Unfortunately, he gets so excited about having a game go down to the wire that he can often grind on fans of the favorite (ie. "THEY'VE CUT THE LEAD TO 15, STILL 5 MINUTES TO GO!!!").  This happened on Sunday.  Yes, Brandon Taylor made a 50-foot shot at the end of the half to cut the lead to 8.  It was a good shot.  But "all the momentum" did not shift to Penn State on that shot.  Plus EVERY time Taylor touched the ball, that's all he could talk about.  If I had time, I would have loved to count the times that shot was mentioned.  I bet it was at least 50.  Let it go already!  Although there admittedly wasn't much exciting to talk about in the second half.

SCREENSHOT OF THE WEEK ALERT!!!!

- On a similar note, check out the halftime stat posted by BTN below.  Yes, it appears that Taylor not only took 11 threes in the first half, but also had one of them count as two baskets!  Not sure how 4/11 FG and 3/11 3-PT FG is possible, but it didn't matter to BTN as they had the graphic up for a good 10 seconds. 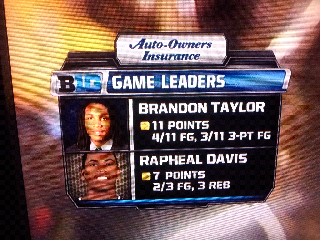 Nice win, Boilers...needed that one.
Tweet
Posted by Erik at 1:52 PM