Even though the Boilermakers had a bye week, there was still lots of action around the Big Ten last weekend.  Sadly, it was pretty mediocre and didn't do much to change the public perception of the conference.  Michigan looked horrible in its marquee match-up against Notre Dame, Illinois and Iowa had devastating games, and most conference wins were by margins far too narrow against weak opposition.

We're one-third of the way through the season (for most teams), and it's pretty obvious the conference is in a down year, if not a record-setting low.  Once conference play starts, if the teams beat each other and none rise to the top, we could be in store for a horrible bowl season of blowouts and no Big Ten teams ranked in the top 15. On the contrary, if a couple teams do rise to the top, we could see a year with only 6 or 7 conference teams bowl-eligible.

On to the rankings, where it gets so difficult each week to determine who is the worst! 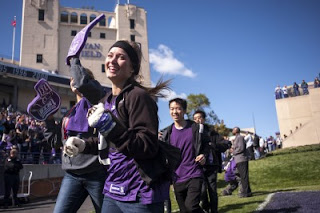 The Wildcats just keep on winning, easily topping South Dakota State of the FCS.  Remember, I was the first to predict a 7-0 start, when they beat Indiana, Penn State, and Minnesota to start the conference season.  Northwestern almost cracked the AP and USA Today top 25 (26th in both), and with an undefeated season a the halfway point, you can bet they'll be getting more national attention. 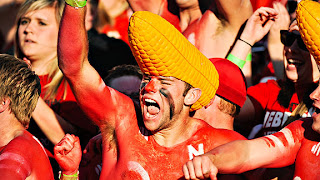 Nebraska gets credit for destroying an FCS team like they should (Idaho State), but they are only rising in the rankings because no one else was impressive last week.  The loss to UCLA looks a little worse after the Bruins got beat by Oregon State last weekend, but the Huskers have looked dominating in their three wins. They can prove my faith in them correct by handling Wisconsin this weekend and helping Purdue out in the Leaders division standings. 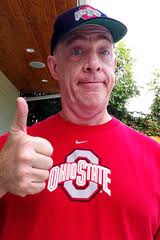 The Buckeyes didn't play that well against UAB, giving up a touchdown on a blocked punt early in the game and only leading by six points deep into the fourth quarter.  Stop Braxton Miller and you'll beat Ohio State, that's for sure, and you know every Big Ten team will be game planning specifically for that until they prove they have another way to win (noteworthy, OSU did score on a drive that saw Miller only run once and never throw, but that's against UAB.  They won't get away with that against better teams).

Purdue moves up a spot even though it was a bye week based on the best performance against a common opponent (Notre Dame), with Michigan and Michigan State. 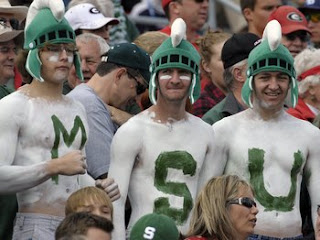 The Spartans could barely score against Eastern Michigan, the same team that Purdue posted 54 points on.  They were losing 7-3 to a vastly inferior team at half time.  I know teams can come out flat against teams that they should easily beat, but I think MSU's second string has enough talent to beat Eastern Michigan handily.  What is wrong with Sparty after losing to Notre Dame? Le'Veon Bell is the only thing that seems to work for the offense, and he had to carry the ball 36 times.  Someone's going to get pretty tired once the season gets further along.  MSU's showdown at home with Ohio State this weekend will tell us a lot about both teams. 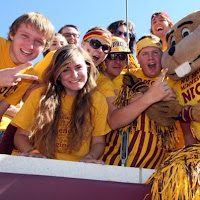 Minnesota keeps winning against inferior competition, but good for them for not crapping the bed.  This time they beat Syracuse, mostly by forcing four turnovers and not giving the ball back.  The offense definitely leaves something to be desired without MarQueis Gray, but then again, it wasn't too great with him either. The Gophers face Iowa this weekend, which could allow them to start 5-0 for the first time since 2004.  Also, Syracuse has now lost to two Big Ten teams and looks to be no better than a MAC school.  Go Big East, right?! 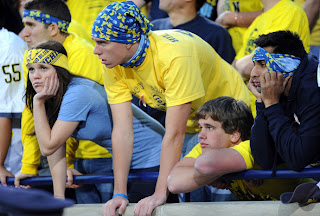 Michigan looked horrible against Notre Dame, mostly because Denard Robinson through four interceptions and lost a fumble.  His turnovers led to all of ND's 10 first-half points, and occurred on four consecutive series.  Better than that (or worse, if you like the Blue), the interceptions were on four consecutive throws.  Robinson went 4-4 in the second quarter...and all those receptions were by the Notre Dame defense.  You can't make this stuff up. The guys got some NFL talent, right?  As I've said, the Wolverines can only go as far as Robinson takes them since he is a one-man offense.  I doubt he'll ever play a game as badly as that one, but his inconsistency could be the death of his team.  I can't wait to see the Boiler defense take him on in two weeks.

Another week with the Badgers underwhelming and barely winning a game they should have more easily won.  With less than four minutes left in the game, Wiscy was only up four points.  They squeaked another one out, though, but the only reason they are getting votes in the polls is because of their name.  Everyone expected Wisconsin to be the cream of the crop this year, at least in the beleaguered Leaders division, and they are simply failing to take advantage of an lightened route to Indianapolis.  I can't wait to see Nebraska pound them in Lincoln this weekend.

Penn State beat Temple 24-13 with efficient running and passing games.  They still aren't very good, but at least they won their game.  Sure, it was against Temple, and the Nittany Liars won't be getting many conference wins, but at least they get to start conference play against Illinois this weekend.  That's winnable for them!

Indiana rises one spot thanks to their bye week.  If only the Hoosiers could stop playing and finish with a winning record, they may be in the top half of the power rankings then.  Unfortunately for them, they get to be the first conference victory for the conference's best team, Northwestern, next weekend. 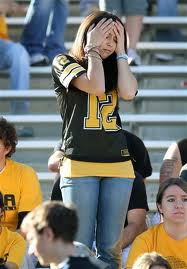 How many times do I have to write about how horrible this team is?  With less than 50 seconds left against Central Michigan, Iowa was up by eight points at home.  The Hawkeyes gave up a touchdown but stopped the two-point conversion.  A narrow victory you'd think, but they let CMU recover the onside kick, committed a personal foul, and put the Chippewas in field goal range.  Anything good that Iowa did on the field is also offset by the fact that this same CMU team lost by 34 at Michigan State.

Illinois lost by 28 points to Louisiana Tech at home.  I'll let that sink in for a few seconds.  That alone gets you last place in the power rankings.  Illinois is no better than a MAC team right now.  They were crushed in their other loss, by Arizona State, and have no wins of even marginal quality.  The Illini get to play Indiana and Penn State this year, but other than that, I don't see them getting enough wins to reach six and bowl eligibility.  That also rounds out the power rankings with four of the six Leaders division teams making the bottom five (and Purdue's permanent cross-divisional rival Iowa being the fifth).  Purdue better not blow this chance.