Wow, the Big Ten sure looked bad this week.  Half the teams lost in non-conference play, mostly on the road, and my prediction that the conference would have a "thick, mediocre middle of the pack" looks to be coming true.  I guess the consolation there is that, even with a hard-fought loss, Purdue has shown it may have the mettle to compete for a division title this year.  But enough about the Boilers, on to the Power Rankings.  Remember, we don't give credit to preseason polls and historical prestige; we're evaluating based on what we've seen in two games so far.  We think that our process is far more judicious (and I'm sure all those people ranking teams like Wisconsin so highly last week wish they were as objective as us!).

1.   Michigan State (2-0) [Last week's rank: 1]: The Spartans easily retain the top spot after throttling Central Michigan on the road this weekend.  The defense didn't give up any points, and MSU looks very well balanced.  In honor of maintaining their place atop the Power Rankings, enjoy the most hardcore MSU fan in the country.

2.   Ohio State (2-0) [3]: Braxton Miller continued to be a one-man wrecking crew, running for almost as many yards (141) as he threw (155) as Ohio State beat Central Florida.  With the Buckeyes down to their third-string running back, a poor game by Miller (or even a mild injury making him less mobile) would be catastrophic.  But if he stays healthy, OSU should drive defenses mad.  They'll play Cal next week, and I expect them to win that one easily, too.

3.   Northwestern (2-0) [7]: Huge jump up the polls this week for the Wildcats!  Why?  Because they're undefeated and beat Vanderbilt in a close game this weekend.  Sure, Vandy is the punching bag of the SEC, but now they have a road win against the Big East and a home win against the SEC.  Not too shabby, and kudos for playing a tougher schedule.  I mentioned the quarterback controversy last week, and both Siemian and Colter both played decently.  Colter had some nice runs, but back Venric Mark had a great game with 123 yards.  The biggest plus for Northwestern was having no turnovers while forcing two key fumbles. 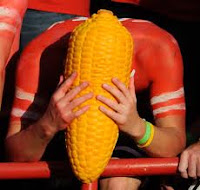 4.   Nebraska (1-1) [2]:  The Cornhuskers narrowly lost a tough game on the road against a ranked team that they could have beaten.  Sound like anyone you know, Boiler faithful?  Martinez had a horrible game passing, but he and Abdullah were solid in the running game.  The defense was abysmal and gave up over 650 years to the Bruins.  Tough non-conference loss, but expect Nebraska to be solid still during conference play. 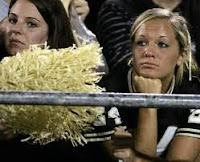 5.   Purdue (1-1) [5]: Purdue played the toughest road opponent of all conference games this week and nearly got a huge win, but still looked very respectable in the loss.  The defense continues to impress, and while there were certainly missed opportunities, when the biggest flaw your team has is a debate about the starting quarterback (and both guys are fair choices), that's not a horrible situation to be in.  Of course, fixing the QB situation could be the difference from an above-average season and a special one.  Although if Marve is hurt, the situation has now fixed itself.

6.   Michigan (1-1) [4]: Michigan wins but drops in the power rankings?  Yes, because they barely beat a mediocre Air Force team at home.  Denard Robinson was the entire offense, which isn't exactly promising if you're rooting for the Wolverines to win the conference.  They need more, and they need better defense, as the stronger home team was, at times, pushed around by Air Force.  Michigan should crush UMass next week, but it will be an intriguing game when they play Notre Dame.

7.   Minnesota (2-0) [8]: Minnesota gets to move up slightly in the rankings thanks to starting out with two wins.  They easily beat FCS New Hampshire, as they should, and their passing was much more consistent.  Based solely on what we've seen on the field, maybe I should even bump them up a bit, because I'm probably holding them back because I expect Minnesota to suck.

8.   Illinois (1-1) [6]: The Illini went out west to Arizona State and got smacked around so badly that Tim Beckman now looks like Gary Busey.  I said the offense would be horrible without Scheelhaase, and it was just so-so, but I also said their defense looked great against Western Michigan, who was held to negative rushing yards.  That same defense couldn't stop the passing game and gave up 510 yards and 45 points to the Sun Devils, and it could have easily been more.  I guess Western Michigan is just that pathetic, and the Illini either don't travel well, or were just really disappointed by the lack of parties near campus.

9.   Wisconsin (1-1) [9]: You all laughed at my low rank for Wisconsin last week after they barely beat an FCS opponent, but now people are realizing what I saw.  Lots of hype, no running game (only 61 yards for Ball), and poor QB play as the Badgers fall on the road to Oregon State.  That's three Big Ten teams losing road games to the Pac-12 this weekend, and only one of the opponents was ranked.  Pitiful. Maybe Wisconsin will right the ship after firing their offensive line coach today?

10. Iowa (1-1) [10]: Playing at home against rival Iowa State, Iowa only managed six points and lost 9-6.  Their offense is impotent, and for a "veteran" quarterback, Vandenberg is the dregs, completing less than half his passes and throwing two interceptions.  Bullock couldn't even get going, only averaging a couple yards per carry.  At least the defense showed up, forcing four turnovers, but that still wasn't enough for the anemic offense.  Wow, impotent and anemic - sounds like Iowa needs a trip to the emergency room stat.

11. Indiana (2-0) [11]: Another big congratulations to the Hoosiers for beating their first non-FCS opponent in two years!  Wait, it was UMass?  They have an FBS program?  Ah, only in name, this team would be lucky to finish in the middle of the pack in a JuCo league.  So until Indiana proves they don't suck by beating someone even remotely respectable, they're still relegated to the near-bottom of the power rankings.  The real bad news for the Hoosiers was the season-ending injury to quarterback Tre Roberson.  He's a real talent, and without him, I don't expect IU to win a conference game this season...again.

12. Penn State (0-2) [12]: Another Saturday, another sad, yet justified, Penn State loss.  This time the Nittany Lions fell by one point on the road at Virginia by giving up a touchdown with less than two minutes to go.  Penn State out-rushed and out-passed the Cavaliers, drew far fewer penalties, and won the turnover battle by a margin of four!  So how did they lose?  Karma.  And "Karma" is the name of the invisible gremlin that caused kicker Sam Ficken to miss four field goals on the day.  Bet they wish he had transferred.
Tweet
Posted by Kirk at 7:39 PM