Make sure to check out our recap of Saturday's game!  Meanwhile, here are a couple of things you missed if you didn't watch the game on NBC...

Screenshot of the week:  Yes, we could use this section for legitimate screenshots to prove the refs are buffoons.  But what fun is that?  This week there are two screenshots of the week.

#1 - The Purdue coaching staff had a rough game with several plays coming in late in the play clock.  There are several theories for this, but NBC caught the true reason early in the second quarter - itchy balls!  It appears that one headless manager/assistant didn't apply his Gold Bond and spent a good five seconds readjusting.  One can only assume everyone on the sideline was having this problem, making it pretty amazing that Purdue kept it as close as they did.  C'mon trainers, where's the Gold Bond?  It matches the school colors too. (Note that my wife actually caught this.  I'm not sure whether to be proud or worried): 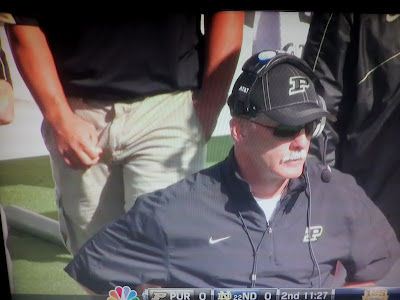 #2 - Check out Gary Bush right next to the NBC symbol.  He's a foot off the ground doing a perfect Touchdown Jesus as Edison scored the game-tying touchdown: 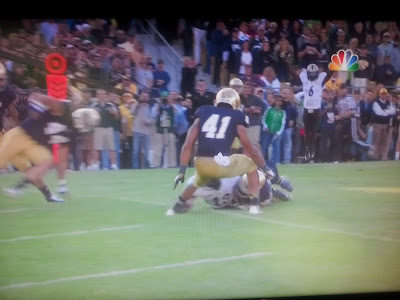 Announcer complaint: NBC's homer announcers are so infatuated with Notre Dame's players, they make it brutally painful to watch the game with sound.  Kirk reports that the crew treated Tommy Rees like some phoenix risen from the ashes during the drive (even before the score/redemption story).  The way the announcers drooled over someone who recently punched a cop was brutal.  Tom Hammond and crew also felt nearly every close call should have gone in favor of the Irish, and Hammond absolutely butchered Antavian Edison's first name multiple times after he scored the game-tying touchdown.  Unlike Kawaan Short from last week, I'm guessing Antavian didn't ask for the pronunciation to be changed this year!

Thing I learned from NBC: NBC's cameras are so infatuated with Notre Dame's players, they make it brutally painful to watch the game WITHOUT sound.  On a 4th and short in the 4th quarter, Purdue had a choice as to whether to go for it or not.  Unfortunately for people watching at a bar like myself, cameras focused for 30 seconds on a Notre Dame linebacker just standing there.  Show us what's happening!  There were also surprisingly few angles of the controversial touchdown/touchback play.  That's probably because three cameras were focused on Brian Kelly, two were fixated on the leprechaun, and one was eyeing the Purdue sideline's crotches.

Irrelevant Comment of the Week - Wife Edition:  "Do you know how embarrassing it is for you to be the only person running around a restaurant in downtown Detroit yelling at the top of your lungs?  Can't you just yell while sitting down?" - My wife immediately after the Josh Johnson fumble recovery late in the game.  Clearly she was never in the Paint Crew - you CAN'T yell while sitting down.

A shoutout goes to the Detroit Beer Company - the ONLY bar/restaurant open on a Saturday afternoon within a half-mile radius of Comerica Park in Detroit.  All beers are brewed onsite and they went out of their way to accommodate 2 Purdue fans even though Michigan and Michigan State played at the same time.  If you ever end up in Detroit, I definitely recommend them even though they provided no compensation for this recommendation and made us pay for all 57 or so beers that we downed.  At least it made the loss less painful!

Picks of the week update:  I forgot to update our standings after Week 2.  Both of us picked Purdue to cover the spread, and cover it they did.  Looks like we'll get a new pair of shoes!  Kirk goes back to even while Erik's less expensive shoes keep him $2 in the hole.