Make sure to check out Kirk's recap of Saturday's game!  Meanwhile, here are a couple of things you missed if you didn't watch the game on BTN...

Screenshot of the week:  Purdue just took a 13-0 lead with a great pass from Caleb TerBush to Antavian Edison.  Everybody go crazy!  Well, unless you don't have time to cheer and instead need to continuously shove popcorn into your mouth in order to finish a GIANT tub of popcorn by the end of the game.  That's what's happening in this screenshot.  Note the guy near the bottom center of the screenshot with the popcorn tub that requires a one arm embrace (shout out to Mark Titus and his sorely missed Club Trillion blog) just to hold on to it.  In the 5 second crowd shot immediately after the touchdown, he stuffs two fistfuls of popcorn in his mouth while everyone else is celebrating.  Well, everyone except for creepy sunglasses dude in front of him. 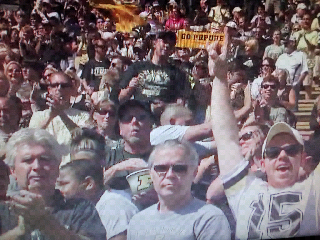 No word on whether he was able to finish the tub before the bars closed for the night.

Thing I learned from BTN: BTN and AT&T need to get their act together.  I was out of town for the weekend and recorded the game in order to watch a nice drubbing on Sunday night.  Unfortunately, AT&T switched the alternate channel that the Purdue game was on, and I was forced to watch 3 hours of Western Michigan at Minnesota.

Announcer/BTN complaint: As I was watching/fast forwarding the Western Michigan at Minnesota game, a minor miracle happened - technical difficulties were forcing them to switch to the Purdue game!  While this allowed me to at least see a quarter of the game, this isn't the first time BTN has had major issues with technical difficulties. In BTN's apology for the Purdue-Western Carolina basketball game, they said:

We recognize that it is completely unacceptable and we will do everything necessary to prevent this from happening again.

Well, it happened again.  Now, things like this do happen - it sucks, but there's not much you can do about it.  Except can't BTN at least prepare for these occurances?  They should have AT LEAST had a running score of the Minnesota game going at all times.  It also appeared as if the sound was working, they were just having video feed problems.  If I was a Minnesota fan, I would much rather listen to Wayne Larrivee give the play-by-play with no video than have them show me a blowout between Purdue-Eastern Michigan on two different channels. It's not like Wayne Larrivee has never done radio before - he's the Packers play-by-play guy on their radio network!  Thanks for screwing up this time so I could watch some of the Purdue game, but get your act together BTN.


Irrelevant Comment of the Week - Wife Edition:  "Oh, you're missing a football game today to see my family? I forgot it was football season!" and "Why are you listening to the Ohio State game?  If you can't get Purdue on the radio, why do you care about any other games?"