Like every other blogger in the universe, we're going to list our Big Ten Conference power rankings each week, but ours will be based solely on what we've seen on the field.  Screw preseason polls that skew things strongly towards expectations and big names.  Win your games, look good doing it, and we'll show you some love. Therefore, expect to see some big swings each week.

Also, we're going to keep Ohio State and Penn State in our rankings respective to their play, despite the fact that they can't make the postseason.  That'll just make it far more fun to laugh at them (probably just OSU) when they see what could have been if they hadn't cheated (or done things far, far worse).

Finally, while we appreciate a TV show/movie/pop culture-themed power rankings list when it's done in a clever way, most of them suck.  So we aren't going to do that.  Instead, we'll just include an awesome* photo of each school with their ranking that showcases how fans should be feeling.  Much simpler, right?

Hit the snare drums and blast the trumpets, because it's time for GoBoilers.net's 2012 Big Ten Football Power Rankings!

Overall, it wasn't a particularly great weekend for the conference.  While most teams won the games they were supposed to (cough, Penn State, cough), many of the victories were far too close.  It looks like there is going to be a very thick mediocre middle pack of the conference; just like a Midwestern beer belly. By the time conference play gets here, I'm not sure much of that will change.

1.   Michigan State (1-0): The Spartans get the top spot for beating the best collective opponent in Week 1, Boise State.  Other teams may have looked better, but remember how inferior some of the competition was last weekend.  MSU didn't win big, but they won, and Bell ran for 210 yards, which is scary for fans of other conference teams.  Their quarterback play is suspect, however, as Maxwell threw three picks, so they are far from invulnerable. 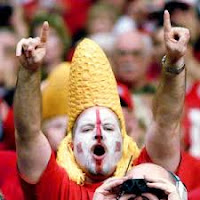 2.   Nebraska (1-0): They won big, as expected, and Taylor Martinez played great. The run game was also really dominant.  Stud running back Rex Burkhead may miss some games with an injury, which could move them from a very good team to just another good team, but until we know for sure, the Cornhuskers are firmly in the discussion for top conference team. His backup had quite a nice game though, so the loss may be manageable. 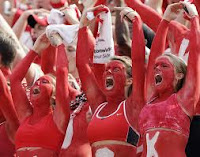 3.   Ohio State (1-0): Braxton Miller ran very well and threw for two touchdowns.  Consider me glad OSU can't make the Big Ten title game this season.  Even without that motivation, they have the talent to win the division and make life uncomfortable for teams like Purdue fighting for the postseason.


4.   Michigan (0-1): It's a little painful for me to put Michigan this high on the list since they got completely owned by Alabama.  I would have put them much lower, but Erik talked some sense into me.  When I thought about how the other Big Ten schools would have fared against the annoyingly-good Tide, I think most would have left with fewer points and even more egg on their face. Robinson played poorly, and their rushing was terrible, but they were also without star running back Fitzgerald Toussaint, who will return next week.  It's almost harder to get a fair measure of how good a team is playing when they temporarily lack a significant contributor against powerhouse Alabama than when they play against a crappy FCS school.

5.   Purdue (1-0): As you can read in my wrap-up, Purdue did some good things against inferior competition.  Despite the suspension of their starting quarterback (which at Purdue doesn't seem to matter thanks to the three-headed QB monster), they looked good, despite some issues with special teams and too many turnovers.  I know this looks like a huge homer pick, but it's easy to make a case that the teams listed #6-12 didn't do anything any more impressive last weekend. 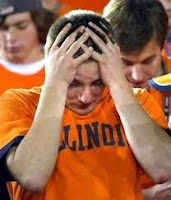 6.   Illinois (1-0): I'm torn (no pun intended) on where to put Illinois, since Scheelhaase may miss some games due to injury.  With him, the Illini offense is looking pretty decent, but without him, they could be horrible.  At least the defense is stout, having held Western Michigan to negative rushing yards in the game.  Either way, the easily handled their MAC foe, unlike some teams.

7.   Northwestern (1-0): I'm actually happy to see Northwestern so high on the list, since I never really root against them other than when they play Purdue.  The Wildcats won on the road at a BCS school, which is impressive, until you realize that it was against a Big East opponent. The strangest thing was that starting quarterback Kain Colter benched himself, leaving backup Trevor Siemian to lead the team to its last-minute winning touchdown.  It looks like with either guy this team will score points, but can they stop anyone?  They let Syracuse rattle off 28 unanswered points in the second half.

8.   Minnesota (1-0): Another team that should be happy to be listed so high after some horrible recent years.  Honestly, neither the Gophers or UNLV, who they narrowly beat in triple overtime, are very good, but they got the win on the road.  Minnesota had a lot of penalties and was quite inconsistent, but they turned it on in crunch time.


9.   Wisconsin (1-0): When you barely beat an FCS school, you deserve what you get.  Wisconsin is a much better team than ninth in the conference, but they were incredibly disappointing this weekend.  Sure, they had a nice lead late in the third quarter, but they gave up some big plays, and they should have won this game in a rout.

10.  Iowa (1-0): The Hawkeyes are an enigma.  I expect them to always be in the top half of the conference, because they always seem to be, but I don't give them much thought any more (other than the fact we have to play them annually).  They should be better than a team that has to come from behind to barely beat Northern Illinois, right?  Bullock can run, but their passer sucks.  Maybe we can trade them a QB?


11.  Indiana (1-0): Congratulations to IU for clearing the cellar of the Big Ten rankings for the first time in a couple years!  Your thank-you notes should be addressed to Penn State, care of their wretched administration.  Indiana narrowly beat Indiana State, an FCS school, but they were almost outplayed and still haven't topped an FBS opponent since 2010.  Even the IU fans are questioning the team and coach already.


12.  Penn State (0-1): The Nittany Lions started their new era with a thud, losing badly to Ohio.  Honestly, Ohio looked pretty good, but this is just pathetic for Penn State, albeit incredibly deserved.  I feel bad for the current players though, and I expect them to rise out of the Big Ten basement soon enough...but not too far.