I think we were all a bit surprised that Purdue scored 21 points on Saturday, making the game against a mediocre Penn State team somewhat competitive.  Even so, it never felt like the Boilers were really going to win or even make the game that close.  Why was that?

Because the defense was absolutely horrible.  Putrid.  Pitiful.  Non-existent.  They made Penn State look like Florida State.  The defense didn't force a single punt.  The let Penn State convert 10 of 12 third downs, seemingly with ease.  Will they be able to stop Indiana with the extra motivation of the Bucket?  I'm scared it won't even be close. 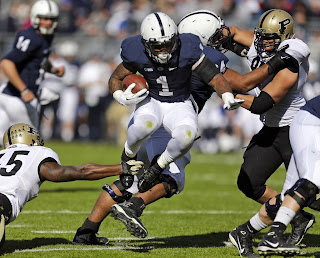 And just because the Boilers put up 14 points, it doesn't mean the offense really saw any significant growth in this game.  Seven points were scored by a great Mostert kick return (they gave him 100 yards, but it was definitely 101, coming out of the end zone), and Etling, the receivers, and the line continued to have problems with execution and communication.  We've ripped on the line a lot, and they are horrible, but Etling also holds on to the ball too long, causing some horrible sacks and fumbles.

Those turnovers were killer.  With the Boilers down seven early in the second quarter thanks to the first good offensive drive in months, the defense, who hadn't been able to stop Penn State at all, forced a fumble.  I actually remarked to my wife right before that play that the only way the defense could get a stop would be a turnover.  That was a golden opportunity for Purdue to tie the game with a short field, but three plays later, Etling threw a bad interception.  Penn State went on to score on their next two possessions.  The only things that could stop them were that fumble and the half.

Then, down ten points in the third quarter, a sack caused an Etling fumble, which eventually resulted in another Penn State touchdown, and the game was essentially over.  Thanks to a Landon Feichter interception to start the fourth quarter, there was a glimpse of hope (OK, not really, we all knew it wouldn't work out), but that series saw yet another Etling sack/fumble that led to the final Nittany Lion touchdown.

So while many may have seen signs of hope on Saturday, just because the offense put together two good drives against a so-so team, and we had a beautiful kick return, it doesn't mean the ship is righted, especially with a defense so porous.  I know the defense can play better than that, but until both sides of the ball can put a full game together, it'll be more of the same bad losses.
Tweet
Posted by Kirk at 1:03 AM