For weeks, we Purdue fans put up with some horrible football while dreaming of basketball season.  Well, it's finally upon us, but the results of the first game definitely leaves me wondering if my hopeful expectations are going to be shattered like they were on the gridiron.

On Friday, the Boilers went to battle with Northern Kentucky, and, oh, was it a battle.  In a game Erik and I both thought Purdue would easily win, against a school that barely qualifies as DI, it took some luck and ace shooting in the final minute for the good guys to come from behind and win. 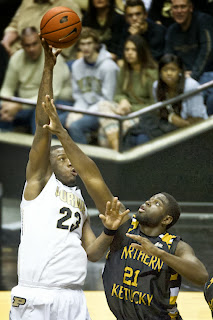 But a win's a win, blah blah blah. No, not so much.  There definitely were some fluke reasons the game was so close, such as NKU making half their three pointers (which almost outnumbered their other baskets, 13 to 14), but Purdue showed some glaring problems that hopefully will be corrected right quick.

Let's start with the goods:

The bads:
Purdue has two games this week, and I'll preview those momentarily.  The result should be the same as against Northern Kentucky, but hopefully with more cushion.
Tweet
Posted by Kirk at 2:27 PM