Football Preview: Purdue at Wisconsin - September 21 - 3:30 - ABC/ESPN2 (depending on where you live)

After the Boilermakers continued their recent futility against Notre Dame last week, the schedule takes the team to Madison where there has been an even worse trend.  Purdue hasn't beaten the Badgers since 2003, or better put, Wisconsin has owned Purdue since The Fumble. I link to the painful video, because as you read in my last post, we Purdue fans have to accept our misery.

Saturday's game, with ABC (or regional ESPN2) coverage, could be the lopsided loss most fans were expecting last week. 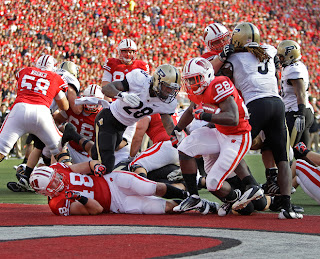 Why Purdue wins
The Boilers played a fantastic first half against the Irish last week.  If they can string two halves like that together, they could have a shot against the Badgers.  Purdue won't have the home crowd energy, but now that the coaching staff seems to be embracing the current roster and calling smarter plays, maybe the growth will continue.  Of course, that growth could simply be Purdue losing by 14 instead of 28.  Maybe the Big Ten officials can blow the game as badly as the Pac-12 refs did last week, resulting in a narrow Purdue victory (OK, seriously, no one wants that garbage. The Pac-12 should be ashamed and fire all those guys immediately instead of a "reprimand").

Why Wisconsin wins
With yet another monster offensive line, the Badgers will likely run on the Boilers all day and put up some monster numbers.  There were some good stops on the ground against the Irish last week, but as we saw the Purdue defense wear out a bit in the second half, it's going to be even worse on Saturday.  The constant focus on the run will also give Wisconsin lots of opportunities to rattle of unexpected passing plays that have killed Purdue in the past.  They can catch you sleeping and even if the passing game falters, the ground battle should be enough for the Badgers to tally more points than the questionable (but improving, right?!) Purdue offense.


Player we're most concerned about since their stock photo may break our TV
First, we have a player who clearly got his "hair did" for picture day.

Senior noseguard Beau Allen has prettier hair than most women I know.  Don't you just want to run your hands through it?

And a special shout out to freshman receiver Jazz Peavy (no relation to Jake).  Jazz seems like a fun guy, and his picture really fits his name.  I wonder if Jazz brings his buddy with him to games.