It's the rivalry rematch today, although hard to call it a rematch when one of the two parties doesn't really show up.  Will the result be different this time?  Can Purdue avoid losing by more than 37 points? 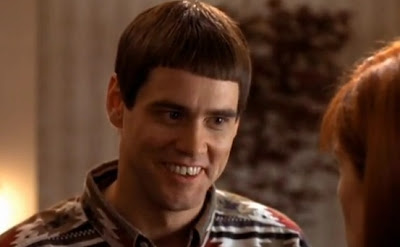 Lloyd: Hit me with it! Just give it to me straight! The least you can do is level with me. What are my chances?
Mary: Not good.
Lloyd: You mean, not good like one out of a hundred?
Mary: I'd say more like one out of a million.
[pause]
Lloyd: So you're telling me there's a chance... *YEAH!*

Why Purdue Will Win
Because everyone on the IU team could be incapacitated by the norovirus?  Seriously though, I don't see anything that could result in a Purdue victory short of shooting 65%+ from the field and IU having a game where they just can't hit a bucket (like both teams in that title game a couple years back).  It's going to be a painful game, and keeping the margin respectable would honestly be a moral victory with this team.  Stop IU from running, slow the game down, and keep the score in the 70's Boilermakers!

Why Indiana Will Win
Because they are a much better team, it's that simple.  As we regrettably saw in West Lafayette last month, IU will force the Boilers to make stupid turnovers, play out of control, and frustrate them to no end when trying to score.  If Purdue shows the same lack of effort for rebounds that has plagued them in the last few games, then expect that margin to be ridiculous as the Hoosiers have the height and hustle advantage.

One thing you absolutely need to know before the game
Let's all agree that this game is going to be painful.  The odds of a Boiler victory are probably hovering around 1%.  So instead, here's a list of things you can do this afternoon other than watch the game:


Our Picks - We like to think we're better than Vegas.  So throughout the season, we'll be "betting" a whole dollar amount versus the spread between $1 and $32, but we can't repeat the same value twice. The spread for this game is Indiana by 19 points.