Where Are They Now - Bryant Dillon

Our seventh installment of the Worst Year Ever edition features the team's starting point guard, but due to his quiet nature and short time at Purdue, some of you probably don't even remember him. 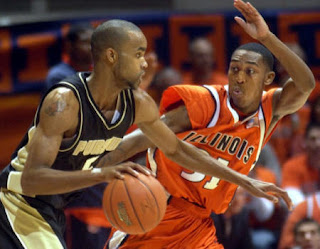 Bryant Dillon went to high school in Indianapolis and earned all-city honors and all-state honorable mention in 2001.  As a 6'6" combo guard with a 6'10" wingspan, he showcased length that could cause match-up problems, but had to work on this jump shot and overall skills. Also, at only 180 pounds, he was thin as a rail. Out of high school he was a two star recruit and didn't have an offer from Purdue, but Iowa wanted him if he'd commit to one year of prep school, and Bowling Green (led by this schmuck) were the front runner for his talents.  Instead, Dillon went to Southwestern Illinois College (SWIC) where he received a lot of praise from coach Jay Harrington, who's amassed over 700 wins at the school. After a nice freshman season, there was chatter that Dillon may come to Purdue after his second season (possibly even walking on), but three games into his sophomore campaign he tore his ACL.  Apparently the curse even impacts JUCO recruits.  After taking a redshirt year to recover, Dillon increased his scoring (15), rebounding (6), and assists (5) per game and accepted an offer from Purdue as a three-star recruit, turning down Baylor and Mississippi.

Coach Keady was excited with Dillon's 6'6" frame and versatility and knew the team would desperately need a point guard after Brandon McKnight graduated.  Also, while at SWIC, Dillon developed a strong defensive presence, hassling shorter point guards and playing tough on the ball, which fit nicely with the Purdue culture.  In his first season as a Boilermaker, Dillon played a quiet 24 minutes per game backing up McKnight and sometimes alongside him as McKnight averaged almost 38 minutes a contest.  I say "quiet" because he averaged only about two points (on only 30% shooting), two assists, and two rebounds per game.  His season came to an abrupt halt only 15 games in as he ruptured the patella tendon in his right knee in January. Two nasty injuries in just about two years (I see a theme of 2's here).

Fortunately Dillon healed well and was ready to serve as the starting point guard for his senior season.  That year, he improved his shooting to 50%, although only attempting about five shots per game and averaging 6.9 points.  At the point he unsurprisingly led the team in assists (3.0 per game) and used his length to pull down the second most total rebounds on the team (3.5 per game).

After graduating, Dillon appears to have taken a couple years auditioning at various camps before getting a professional contract in Europe.  In 2008-2009 he played for BK Nova Hut Ostrava in the Czech Republic's top league.  Dillon was signed to replace an injured player (Mike Mitchell), but he only lasted six games for the Czech team after not meeting their expectations on the court.  I mean, how could you let him stick around when his "coefficient of usefulness" was only 7.4. The horror! This series has really made me love Google Translator; you have to enjoy a point guard being called "quarterback."

After getting booted from Ostrava, Dillon apparently played a few games for a team in neighboring Slovakia, BK 04 AC LB Spisska Nova Ves.  I'm not making that name up! I have no idea what any of it stands for, but he only lasted three games with that team before departing the region formerly known as Czechoslovakia.  It's probably a good thing he didn't stick around, since he must have felt ancient and out of place playing with a group of high school JV players from Wisconsin.  Seriously though, the Slovaki guys are as white as white can be and look very, very young.  At least the Czech team looks like they mean business.  And by "business" I mean they look like great accountants.


The following year he joined the Madrid team in the summer Euroleague, where he played with another former Boilermaker!  Who?  Nate Minnoy!  Apparently we were wrong that Nate was the only member of the 2005-2006 team we had profiled that didn't play professionally after leaving Purdue.  Alas, that season was both Minnoy and Dillon's only stint in the Euroleague that I can find.

In the summer of 2011, Dillon attended the Diamond Midwest Invitational, which helps players get exposure for professional contracts.  Looks like former Boilermaker Dan Vandervieren also attended last summer. He's been playing in the NBA Development League and in Latvia the last two years, but we can talk about him more in a future post.  Back to Dillon - I couldn't make him out in the film from the camp, and he wasn't named to their all-star list, so we can't be certain he actually attended.  If he did attend though, it couldn't be good that they touted his participation but failed to denote him as an all-star.  He also attended the Higher Level Sports International Showcase last summer (looks to be based out of Japan) to try to get signed by an international team.  I hope he's playing somewhere, although he's possibly in a small town in Turkmenistan without the luxuries of the internet. At least it's not Iraq, right Marcus?

You can find Dillon on Facebook, where I'm still awaiting a reply to my request for an interview.
Tweet
Posted by Kirk at 10:17 PM

Email ThisBlogThis!Share to TwitterShare to FacebookShare to Pinterest
Labels: Basketball, Bryant Dillon, Where are they now