Where Are They Now - Nate Minnoy


Past Where Are They Now Posts:
Part 1 - Matt Kiefer

Quick!  Name the last four Purdue players to average 10 points or more in their Freshman year.
Amazingly, Purdue’s recent rise back into the national spotlight that began in the Fall of 2006 has only produced 2 double-digit scoring freshmen.   You would have to go all the way back to that awful 2005-2006 season to find the other 2 players (read on to find out who they are!).

With 2 freshmen among the top scorers, one would think that the stretch of NCAA Tournament runs began with this high-scoring Freshman class.  Instead, neither player would be seen in a Purdue uniform again.

Our Where Are They Now – the ’05-’06 Worst Year Ever Edition feature continues with Nate Minnoy... 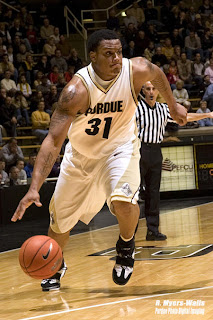 Nate Minnoy was one of the highest ranked recruits to come Purdue in the past decade, and his bright future was never more evident than when he dropped 25 points in a 82-75 win over Wofford  in his and Matt Painter’s Purdue debuts (Bonus for clicking on the link: check out the scoreboard at the top of the page as Number 5 Michigan State lost to Hawaii by 22 points that day!  Needless to say, the national press was not talking much about Purdue’s opener that night).

Minnoy would never score more than 15 points in a Purdue uniform again, but was averaging a respectable 10.2 points per game as he faced Northwestern in his Big Ten debut.  Playing in front of friends and family (he graduated from Hales Franciscan High School in Chicago), Nate tore his MCL  and became the fourth Boilermaker starter to be out for the season.

Still, hopes were high for the freshman’s career, as a possible 2006-2007 starting lineup of David Teague, Carl Landry, Terrance Crump, Nate Minnoy, and Marcus White was going to be a tough team to face with a full recovery from Minnoy.  Unfortunately, Nate had some other issues, as can be seen in this MTV Nike Battlegrounds video from 2005, in which Tim Hardaway and Lebron James (!) both mention how Minnoy’s ego might lead to his downfall.

In the video, Nate says, “Basketball’s my ticket to get rich in the NBA or get a college degree.”  Unfortunately, basketball never directly led to either of these things.  Nate abruptly chose to leave Purdue two months before the start of the season.  This stunned everyone in the program, as Minnoy had already been published as part of the year’s promotional materials.  However, this was only the beginning of the tumultuous timeline of Nate Minnoy:

This is where the timeline gets a little hazy.  What happened to the guy selected as third-team ALL-DECADE for Illinois High School basketball?
Well, Nate eventually headed back to Central Michigan to study communications, presumably on his own dime.  According to his twitter and facebook accounts, Nate is still at Central Michigan, although it is unclear if he is still a student.  If he is still a student, let’s hope his first real-world job involves tweeting, as he averages nearly 50 tweets a day!

Basketball-wise, Nate appears to be playing in pick-up games at the school’s recreation center and is the coach of the Central Michigan “club” basketball team.  Once a Boilermaker, always a Boilermaker though: just yesterday, Nate tweeted, “Sprained PCL is wat the trainer say... torn acl n my right knee ... #CantWin”.

Off the court, Nate has a young son and tweets about him all the time.  He’s also gotten into some trouble with the law.  Last year he was charged with driving with a suspended license and according to his twitter account, this month he took a “plea deal” for an unspecified court appearance.

Nate Minnoy’s career peaked during high school, as college injuries, disciplinary issues, and an oversized ego led to one of the rarest “feats” in basketball – playing for 4 different universities in his 4-year college career.  While a basketball future isn’t likely in the cards for Mr. Minnoy, he is still affiliated with Central Michigan and will hopefully be getting his life back on track in the near future.

By the way, did you come up with the 4 Freshmen who have most recently averaged double-digit points?  The two most recent are Robbie Hummel and E’Twaun Moore (JaJuan Johnson didn’t average double digits in his freshman year).  Nate Minnoy was the third and is joined on this list by a teammate from the 2005-2006 season.  Stay tuned for a future “Where Are They Now” to find out who it is!
Tweet
Posted by Erik at 6:43 PM

Email ThisBlogThis!Share to TwitterShare to FacebookShare to Pinterest
Labels: Basketball, Nate Minnoy, Where are they now