Our plan is to keep this blog Purdue-focused, and in that vein, I feel it appropriate to spend some time moping about another team I follow through the lens of a Boilermaker.

As a life-long Purdue fan, I know we aren't spoiled; we're resilient, probably a bit pessimistic or bi-polar, and proud of our school for more reasons than just sports.  The last few years have showcased a lot of highs and a lot of lows - with some of the lowest points coming at the result of injury.

It's been written (literally) ad nauseam, but recent and current Purdue players don't have the best luck with their ACLs.  In the last five years the list of high-profile athletes missing time with torn ACLs includes: 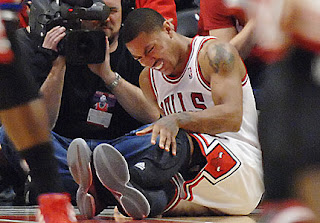 There are probably more I forgot, too.  So why am I lamenting these past injuries?  Because of this. Now, I'm not nearly as big a fan of the NBA as I am of college basketball, but I have great love for the Chicago teams I grew up rooting for (and teams featuring studly Purdue alumni).  I understand any detractors who don't approve of how Derrick Rose handled his brief stint as a "student athlete," but as a professional (and young kid at that), he has been nothing but a exemplary player and leader while showing high levels of character and integrity.  So to see the former MVP go down in the playoffs, after a year of nagging injuries, on the best team in basketball, it just sucks.  It really, really sucks.

Purdue fans have learned class from the rash of injuries; we feel for even our most hated rivals when a player gets hurt (even if he really dislikes us).  I'm sure this isn't the case in the realm of professional sports, where we can attack millionaire adults as opposed to kids, but I hope people feel for Rose like I do.  At the least because you hate the Heat and are rooting for anyone else to beat them.  The Bulls still have a shot though, and the Boilermaker in me knows we love the role of underdog.
Tweet
Posted by Kirk at 3:56 PM