With two open scholarship slots left to fill for the upcoming season, after the departures of Barlow and Hart, but no available scholarships the following season, I, like most fans, am strongly hoping that Painter works his magic to lure a talented 5th-year-senior transfer.  There's potential to sign a veteran impact player, with the only real risk being team chemistry, something Painter shows he cares a lot about.  So I trust that he won't simply offer anyone just for the extra warm body.  The team also could use another guard, preferably a point guard that can help split time with freshman Ronnie Johnson, and a point with experience could do wonders for RJ.  This would also allow brother Terone to play his more natural position as the off guard, so that he didn't have to split time at the point, and possibly freeing up the rotation for more minutes of an RJ/TJ back court.  Just something about two brothers who know each others' games so well playing together is exciting. 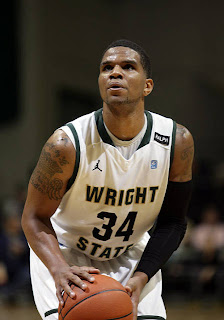 Therefore, I get excited at the prospect of Julius Mays transferring to Purdue.  Mays is leaving Wright State after one season, where he averaged 14.1 points and 2.5 assists (while being nominated for the Geico play of the year for a cool buzzer beater).  He was named the Horizon League Newcomer of the Year and second-team all conference.  Mays previously attended North Carolina State as a 3-star recruit for two years before transferring to Wright State to get more playing time.  Purdue showed interest when Mays was in high school but never made an offer to the Marion, IN native.  Because he's graduating, Mays can play next season without sitting out a year.

There's no word yet on if Painter has made an offer, but given Mays's ties to Indiana, the ability to come in and have playing time at a competitive big-conference program, and the need at point guard, I really hope we can land him.  From what I've read, Mays is a hard worker and a high character individual, so I'd expect him to fit in well with the rest of the team.

Email ThisBlogThis!Share to TwitterShare to FacebookShare to Pinterest
Labels: Basketball