After shocking Wisconsin this weekend, can the Boilers upset another ranked opponent when they face Michigan on Wednesday night?  I just hope the Wolverines aren't wearing those horrible highlighter uniforms. 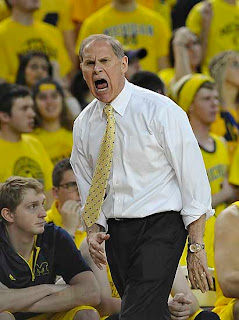 Why Purdue Will Win
You could say that now may be the best time to be facing Michigan.  In the last 31 days, the Wolverines have gone 4-4.  The four wins have been by an average of six points, and all were at home.  All four losses were on the road, and while it's not unexpected to lose at IU, Wisconsin, and Michigan State, they lost most recently to Penn "we're horrible at basketball" State.  If those guys can beat Michigan, certainly the Boilers have a shot.

Also, look for Purdue to work hard on the glass again, like they did against Wisconsin.  I was surprised to see that the Boilers lead the league in rebounds per game, and Michigan is only eighth.  They aren't as physical a team as you may expect, so its possible the Boilers could simply outwork them (as long as at least some of their shots are falling).

Why Michigan Will Win
With all the talent on this Wolverine team, they are sure ending the season poorly.  However, they still have plenty of offense to outscore the Boilers.  Michigan ranks second in the conference in just about every offensive category, but they also rank the same in giving up the fewest turnovers.  The actually have the best steal to turnover ratio in the conference while Purdue has the worst.  The Purdue defense will be hard pressed to stop Michigan piling on the points, and it's unlikely the Boilers are capable of keeping pace in a track meet.

One thing you absolutely need to know before the game
A lot was made about Michigan's victory over MSU despite the Wolverines shooting 0 for 12 from three point land after being the second best team in the conference from deep.  However, don't expect that to be the case on Wednesday night, as the teams (by far) best shooter, Nik Stauskas, will return from an eye injury (he was elbowed in the eye by our least favorite thug).  It will be critical to not let him get open looks, since the rest of the Wolverines can die by the three. 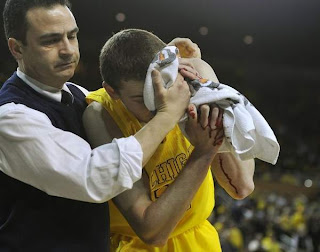 Also, if Purdue can pull the upset, it will be Painter's 200th career victory, a nice milestone, but not likely any extra motivation.  Playing spoiler and trying to get to .500 is motivation enough.

Our Picks - We like to think we're better than Vegas. So throughout the season, we'll be "betting" a whole dollar amount versus the spread between $1 and $32, but we can't repeat the same value twice. The spread for this game is Michigan by 6.

Values already bet
We've bet all the values 1-32, so we'll have a special value bet for the final regular season game against Minnesota this weekend.