We're all pulling for the men's basketball team to make a miraculous run to win the Big Ten Tournament this weekend (their only chance to make it the Big Dance), but no one is holding their breath.

The Purdue women's team, on the other hand, seems to own the conference's annual tournament.  For the ninth time in 16 years (and the 19 years of the tournament's existence), the Boilers simply owned the Big Ten when it mattered most.

As defending tournament champions, the road looked daunting when Purdue faltered down the stretch this season, losing five of their last eight.  That earned only the third seed in the tourney, but the team was able to win every game by double digits, taking down Wisconsin, #2-seed Nebraska, and #4-seed Michigan State in the finals.  Sure, the Boilers benefited from Michigan State upsetting #1-seed Penn State, but you win the games on the schedule.

Today's championship game was decided pretty early, when the Boilers nailed their first eight baskets and took a 33-14 lead into halftime. It was also some nice revenge after the Boilers lost to MSU at Mackey just ten days prior.  Beating a team that previousy upset you at home is important, but utterly destroying them is certainly nice.

The team's lone graduating senior put in a nearly perfect game.  Drey Mingo, who it's impossible not to root for, no matter where you went to school, tallied 24 points (only missing one shot, a three-point attempt), eight rebounds, and three blocks while being named the tournament's Most Outstanding Player.  Congratulations to the entire team, and here's hoping this great momentum can lead them team deep into the NCAA Tournament. 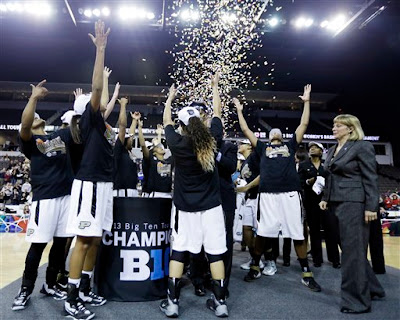