As the headline exclaims, it was gold today for a guy who proudly sports the gold and black!

I've never had so much fun following a sporting event via updates on my phone, constantly refreshing the screen to see how Boilermaker David Boudia was doing in the 10m platform diving final today.  Thanks NBC for waiting until 8pm to televise something you could have easily shown live on one of your 5 networks.

After barely making it through the qualifying round on Friday, placing 18th and taking the last spot in, Boudia placed third in the semifinal this morning behind the two star Chinese divers.  That meant he dove third from last in the final this afternoon.

After four rounds Boudia had a narrow lead, but after Brit Tom Daley scored over 100 points with his fifth dive and one of the Chinese divers (Lin) had a horrible dive, it was down to three men for the top three spots in a virtual three-way tie, with one dive to go.

Boudia brought out the big guns and scored an astonishing 102.60 on a back 2 1/2 somersault 2 twist maneuver to take the lead and then had to wait to see if China's Qiu could top it.  Qiu performed another fantastic dive, but only scored 100.80 and Boudia could celebrate his victory.

Boudia can add the individual gold to his bronze in the synchronized event.  What a performance!  Not only is Boilermaker country proud, but the entire nation as well. 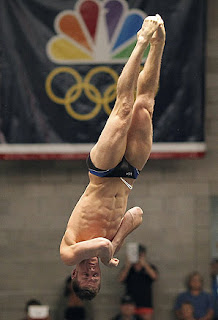