I love watching the Olympics.  Slap an American flag on your uniform, and I don't care what sport you're playing, I'll root for you to beat that other guy or gal wearing a different flag.  The Olympics are the only reason most of us ever care about gymnastics, swimming, or curling, but we fall in love with those events and the electricity of the games. 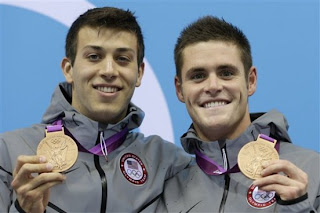 Therefore, it makes it so much more fun to root for someone not only competing for your country, but also representing your school.  As most Purdue sports fans know, Olympic diver David Boudia brought home a bronze medal yesterday in the 10m platform synchronized diving event.  After placing fifth at the 2008 Beijing games at the age of 19, Boudia has grown into a very accomplished diver and surely benefited from calmer nerves as a veteran competitor.

Boudia's medal is the first for a Purdue graduate competing in the Olympics in a long time.  Back in the 2000 games, Chris Huffins earned a bronze in the decathlon, but Huffins never graduated from Purdue, only competing two years in the Big Ten before transferring to California.  To find the last graduate to win a medal, you have to go back to Naismith Hall-of -Famer Terry Dischinger who played as a collegiate athlete on the 1960 men's basketball team.  That team featured future greats Jerry West, Oscar Robertson, Jerry Lucas, and Walt Bellamy and won a gold medal.  Prior to the 1992 Dream Team they were regarded as the best US Olympic basketball team ever.

To find the last Purdue graduate to medal in an individual event at the Olympics, you have to go all the way back to Keith Carter in 1948.  Carter won silver in the 200m breaststroke, also coincidentally at games held in London.  That's 64 years and 15 Olympic competitions between individual medalists.  Big thanks to David for bringing some pride back to Boilermaker country.

Congratulations to David, and we'll be rooting hard on August 10th and 11th as he competes in the 10m platform individual event.
Tweet
Posted by Kirk at 11:47 AM