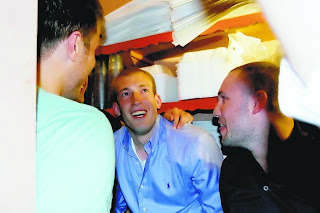 Although it was a long wait, definitely one full year too long, let alone 58 picks, Robbie Hummel made it to the NBA on Thursday night.  The Minnesota Timberwolves, an often floundering franchise, has been righting its ship lately and made a smart decision many other teams failed to make.  We couldn't be more excited for Robbie, who waited out the evening with friends, family, and teammates at Bruno's near Purdue's campus (I think our invite got lost in the mail).  The three Baby Boilers are now all grown up, and as we expected after their amazing freshman seasons, all three were drafted into the NBA.  If only the Celtics could have picked Robbie too, am I right?!

I waited to post about Robbie heading back to Minnesota because you never know what trades may happen immediately following the draft, but it looks like for now the T-wolves will be employing his services (although they're trying to acquire Pau Gasol from the Lakers, so you never know if Robbie will get thrown in a deal and head west).  He gets to return to the land of unspeakable injuries and will hopefully break the curse with a long and successful NBA career.  We know he has the skills, the brains, and the drive, so hopefully the body holds up.  We've seen that with those traits a Boilermaker can make quite a career in the NBA.

So what's in store for Robbie in Minnesota?  Many NBA experts think Minnesota, after years of futility and confusing management, has the chance to turn the corner next year and even contend for the playoffs.  The team hasn't won more than 40% of its games since 2006, but prior to some key injuries last season, the Timberwolves had a winning record. The roster next season boasts All-NBA second team stud Kevin Love, who is a 26 ppg/13 rpg monster, and Spaniard point guard Ricky Rubio, who is currently recovering from knee surgery after tearing his ACL in March.  At least that gives Robbie and him something to talk about.

Last year's top draft choice, Derrick Williams, has potential but is still learning with a below average PER.  He could see more playing time alongside Love or be relegated to backing him up. The team has a serviceable center (and the infamous Darko if they don't amnesty him), but is worthless at the shooting guard spot.  Previous top five draft choice Wesley Johnson looks to be a bust, and the rest of the team is composed of various mediocre (or worse) role players.

One bright spot - the team is well under the salary cap, which leaves them the chance to acquire another star, like Gasol, although they could certainly use some better shooters.  They're pursuing Jamal Crawford and the recently-returned-from-retirement Brandon Roy, but I think it's a long shot they get either player. Hopefully that gives Robbie the perfect opportunity to make a name for himself, although he'll have to pass Chase Budinger on the depth chart, who plays a very similar style game. Maybe if he does ESPN can learn to spell his name correctly. 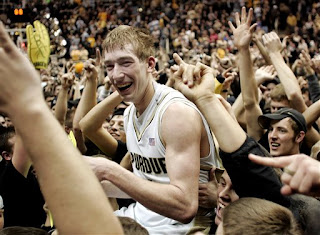 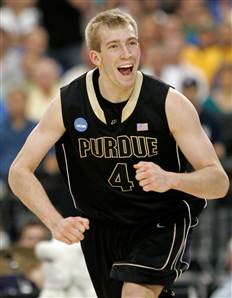