Yet another Boiler bye week gave me ample time to procrastinate this post.  I should have been more excited since Purdue didn't lose by 35 points, but getting shutout doesn't make me want to talk about the moral victories I saw last weekend.  Losing still stinks, especially when half the team looked prepared for a football game.

While Purdue's defense held Michigan State to only seven points, and those came with under nine minutes to play in the fourth quarter, the Boiler offense was hapless and laughable, giving up infinitesimally more points than it scored.  So let's get to my notes from the game, since I'm sure your just dying to relive it.

Early on, it seemed like the Purdue offense had the perfect game plan to beat the Spartans.  The power running game behind Brandon Cottom was moving the ball nicely. Cottom had more carries (5) on the first series than he had been given all season prior (3)!  Danny Etling, in his second start, didn't look horrible on the first series, and the Boilers crossed midfield.  But as became the trend for the day, the offense could frequently get into MSU territory but could never convert that into points.  It also didn't help that Cottom got hurt on the first play of the second half.

And then there were Etling's rookie mistakes.  On the second series, the Boilers actually started in Spartan territory thanks to a great three-and-out by the defense and a horrible MSU punt.  On fourth-and-one, Coach Hazell went for it, and Etling gained the necessary yardage.  Yet on the very next play, Etling faded back to pass, I sensed trouble, and he horribly overthrew his receiver resulting in an interception in the endzone.  It wasn't even close, and it was incredibly deflating.  For the remainder of the game, Etling made some poor over- and underthrows, had a very costly fumbled snap on a critical third down, and the offensive looked awful in the fourth quarter with the game still winnable, but the bigger frustration was with the five guys in front of him.

Can we please get an offensive line worthy of a Big Ten team?  Etling was scrambling most of the day, got sacked five times, with the first being the main turning point in the game.  On Purdue's third offensive series, following the costly end zone interception, they had driven once again into MSU territory.  On third and six the Spartans decided to hang back and send in three initial rushers, with a fourth coming in a bit delayed.  The five Boilers on the offensive line couldn't contain the three rushers, letting Max Bullough come up behind Etling completely untouched.  The sack caused a fumble that bounced into the arms of another Spartan who ran 45 yards for the easy touchdown.

Five guys to block three rushers, and you let a guy in untouched on the quarterbacks blind side?!  Two guys blocking two Spartans, and three guys standing around, blowing assignments, and watching the grass grow.  I wish I hadn't deleted my recording of the game, so I could call those guys out by name for not just sucking at their job but also jeopardizing Etling's health in the process. 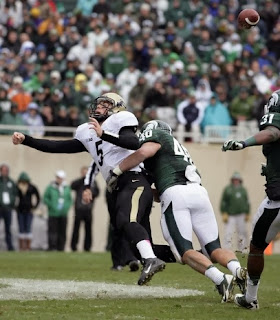 Thinking about the offensive line is so frustrating, that I want to reflect on some good things now.  The defense was fantastic, relatively speaking.  We knew the MSU offense wasn't very good, but it was simply nice to see them hold their own, bend and not break, and only give up big drives in the fourth quarter (which made sense since the offense had already lost interest in the game).  Giving up 182 rushing yards isn't great, but it was better than the Wisconsin and Nebraska games by far, and Michigan State was fairly one dimensional pounding it on the ground.

Cody Webster was also a bright spot, having a great day punting (as I mentioned he'd need to do), averaging 45 yards per punt on six kicks, and pinning MSU behind their twenty yard line four times.  It's nice to see Webster bounce back after a rough week and reclaim his rightful MVP throne.  The other type of kicking was considerably less impressive.

With the deficit being only seven points most of the game, Purdue needed any points it could muster.  Paul Griggs missed both his field goal attempts, the most disappointing being a try from 41 yards to start the second half.  Purdue could have gained all the momentum for the second half if Griggs hit that one, but instead, it just seemed to continue the Boilers' futile run.  But his 51-yard miss, while it also could have given the team a ton of momentum heading into halftime, was on the coaching staff.

Purdue got the ball with 45 seconds to go in the half and all three timeouts, starting in MSU territory thanks to a huge 40-yard punt return by Frankie Williams.  Thanks to a couple stupid Spartan penalties, including a pass interference call when the Boilers went for it on fourth down, Purdue was able to get in field goal range, but Hazell used his timeouts thoughtlessly, leading to such a long field goal attempt.  Here's the progression:

There are nine full seconds to go, and you don't run another play?!  Now, I understand that decision to a point: with a horrible offensive line, you can't risk an Etling sack with no timeouts remaining, and miss the opportunity to at least try to put points on the board.  And the offense hadn't done anything "right" that entire drive yet, since all positive yardage had been gifted by MSU.

But if you hadn't inanely wasted your final timeout during a dead ball, you would have had time to run a play with nine seconds remaining, and if it did fall apart or Etling was sacked, you still would have had a timeout to save the day.  But instead Hazell wasted his final timeout to have a pow-wow with the team and decide, "Screw it, just go boot it."  Someone tell me how that wasn't moronic.  What made matters worse was that Griggs's kick was straight and just lacked a little distance.  Five more yards from running that last play and then calling timeout could have easily resulted in three points for the Boilers.

I could rant about that decision-making all day, but it's stuff like that that makes me question Hazell's fit as coach when you couple it with the poor preparation and motivation this team has shown all season.  Nothing seems to be working under this current regime, and I don't know what to think of Shoop, but I wasn't a fan of the hire in the first place after suffering through his team as offensive coordinator with the Chicago Bears.

But back to the players on the field: would the team have put up more points with Rob Henry under center (or more likely, a few yards behind center)?  That's certainly debatable, but I doubt it, and at this point it doesn't matter.  As a fan base, we have to take these growing pains while our rookie quarterback develops.

Nothing good is likely to happen this year (no, we aren't going to beat Ohio State, get your head out of the clouds), so all I'd like to see is this team continue to play hard and show signs of improvement, how ever meager.  We definitely saw that last weekend, and let's hope it's not another three games of suck in between like it was after the Notre Dame game.

On a lighter note, as I warned you about in my preview, it was sure fun playing "Find the Fou" on every MSU offensive play.  He's kind of hard to miss.