I know I'm a bit late on this recap after being out of commission earlier this week, so I'll save you my wordy John Kerry-esque storytelling and get right to the point. 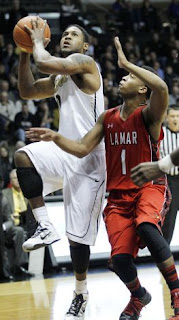 Purdue won big against a very over-matched Lamar squad.  There were lots of good things that happened in the game, but it's hard to look at them objectively when the opponent is so poor.

Board Dominance: Purdue out-rebounded Lamar 48 to 30, including 17 offensive boards.  With their size advantage, that was expected, but it was nice to see the energy getting to the ball, and for most of the first half Lamar didn't have an offensive rebound.  That poor guy, Lamar, must have been hard playing 1 on 5..

Big and Little: Purdue's most lethal offensive threat, Terone Johnson, did a great job driving the basket, using his body, and scoring 16 points in only 24 minutes, but more impressively he also pulled down a team high seven rebounds.  The team's most powerful offensive threat, AJ Hammons did some great work inside, scoring almost at will when fed the ball down low.  They make quite a nice one-two punch as Hammons comes along this season, and though both will have more trouble when the inside has some bigger bodies bouldering around, I like what I see.

Time for Time: Painter was able to play everyone on the bench (including the walk-ons), so it got game experience for a lot of Boilers, and most took advantage.  It's never a bad thing to give guys experience, since David and Simpson can always use it as freshman and they aren't seeing many minutes in the highly contested games. 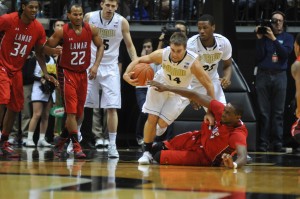 Dru Master: Speaking of bonus playing time, Dru Anthrop got into the game early in the first half and played some great hustle basketball.  He tallied four steals and three assists to go with three points, but he was constantly diving after balls, getting tie-ups, and hounding the opponents on defense.  Now, I don't expect that from Dru once the competition is faster and longer, but it was nice to see him playing his heart out, and the Boilers may end up needing him down the road.

There were, of course some things that weren't so pleasant.

Byrd Dog: DJ continues to struggle from the field, and other than his big game against Clemson, he's been terribly unreliable.  Byrd scored two points on his only attempt from the field in eighteen minutes of action, which is fine in a game like this where the Boilers didn't need his scoring, but it was almost like he wasn't there.  Maybe that was intentional, but I'd much rather see him get back into a groove scoring, as they'll need it in conference play, especially from deep.

Three Points, Shoot: Speaking of three point shooting, the team was bad again, going 4 for 11.  I just grimace every time I see a long shot.

Giving Money to Charity: Purdue's free throw shooting was once again abysmal.  57% (12 for 21) will not cut it and there will definitely be lots of losses on the horizon in that margin of error.  I just don't understand the inability to do the one skill that you can actually practice to the point of perfection.  Surprisingly, the only guy who didn't miss a freebie was Jacob Lawson (2 for 2).  Didn't see that coming, but  kudos to him for doing so.


Picks Update
We're throwing out Erik's bogus -11 spread for this game based on CBS Sportsline's computer, since there was in fact official betting on the game.  I was able to find lines that opened at Purdue -20 and closed at Purdue -19.5.  Since my pick was a 20-point win for the Boilers, I'm giving myself the benefit of the doubt and taking the win (which would have still been consistent with the CBS results). I need a win anywhere I can get it.  Maybe one day I'll be back in the black.  Erik continues to be nearly perfect on the season at 9-1.  I hope he's actually putting money on these games so we can have a swanky blog retreat this summer with his winnings.